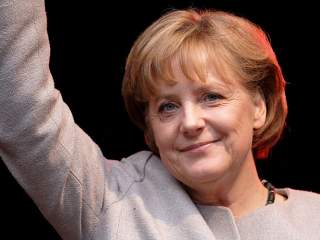 The Greek parliament has voted through the preliminary conditions of a third bailout presented as an ultimatum to Greek Prime Minister Alex Tsipras in Brussels last weekend. Unsurprisingly, the streets are restive.

But otherwise Greece's capitulation is complete.

With this victory (of sorts) up her sleeve, what will Angela Merkel's next move be?

Last week, I suggested elsewhere that, by pushing the European Union to breaking point over Greece, the German Chancellor had already failed the test of statesmanship. That judgment looks no less correct this week. On the contrary, Germany's reputation has taken a battering on both sides of the Atlantic.

But it shouldn't be taken to mean that Merkel doesn't have a plan, or at least a sense of what she wants. A long biography in the New Yorker last December described her as haunted by the idea of Europe's lack of global competitiveness: proverbially, "7 per cent of the world's population, 25 per cent of its economic output and 50 per cent of its social welfare".

Indeed, Berlin went into Sunday's summit apparently determined to impose its vision of economic rectitude on Greece or chuck it out of the euro.

In effect, Greece will become a Eurozone protectorate. Indeed, last night the Greek parliament made about the biggest surrender of national sovereignty it's possible to imagine one country demanding of another in peacetime. In an interview with The Guardian, Jürgen Habermas said that Germany had "openly made a claim for German hegemony in Europe."

This will send a chill around the other capitals of Europe.

This is particularly true in the Mediterranean south where many countries still face the productivity and competitiveness challenges that lie at the bottom of Greece's travails within the euro.

Jean-Claude Juncker, the president of the European commission, cannot have understood the full significance of what he was saying when he described the bailout as "a typical European arrangement."

Comparisons have been made with the punitive 1919 Treaty of Versailles.

But a better analogy is probably the Council of the Public Debt imposed on the Ottoman Empire in the aftermath of the 1878 Congress of Berlin, when Istanbul appeared about to default on enormous debts to British and French banks. The Council managed Ottoman revenues in bondholders' favor until the resentment it aroused helped push the Porte to side with Germany in 1914.

A similar debt crisis brought British administrators to Egypt in 1882: what started as a temporary occupation lasted until 1952.

There's always been something quasi-colonial about the "European project."

During the Cold War, European integration was as much about consolidating liberal democracy and market capitalism in southern Europe—Italy, Greece, Spain and Portugal—whose corporatist and authoritarian traditions were but the flipside of locally strong Communist and left-wing movements, as about preventing the next world war.

But this was feasible only as long as it was seen as being voluntary and above all consistent with the democratic values it hoped to instill.

The German power play in Brussels left that in smithereens.

The "technocratic" governments installed (apparently at German insistence) in Athens and Rome in 2011 were tolerable inasmuch as they appeared as domestic crises driven by the pressure of the markets. But last Sunday's ultimatum came directly from the chancelleries of Europe—above all, Germany and the crescent of northern and central states grouped around it: Belgium, the Netherlands, Austria, Slovakia, Estonia, Lithuania, Latvia, and Finland.

The collapse of Communism long ago removed any pressing need to indulge southern Europe's leftists. The massive increase of German influence in formerly Eastern-bloc and Soviet Europe that followed EU expansion now pits the interests of the new Baltic members against the old ones from the Mediterranean.

That Greece is still in the euro at all is being reported as the signal victory of France. And though since their own mid-2012 debt crises, Rome and Madrid have lived only by the (grudging) grace of the European Central Bank, Italian Prime Minister Matteo Renzi is said to have told Merkel that "enough is enough."

That might have stayed Greece's expulsion from the euro. But that a Brussels official could describe German negotiating tactics as "waterboarding" reflects frustration with a German government insouciant about the dance of European unity that the European Commission has choreographed for six decades.

For there have always been two parts to the European project: the utilitarian and the mythic. By forcing the harmonization of fiscal policy across the Continent, Germany's actions at Brussels may ultimately strengthen the former. But they sound a death knell for the latter impossible to miss.

With Greece's surrender so many of the old EU myths have gone, and it's worth trying to take stock of what remains.

The euro is the D-mark by another name. The currency union France insisted upon for binding German power to European (read: French) goals after reunification has instead turned into an instrument for binding the rest of Europe to Germany. To compete in the 21st century, Germany intends to realize a leaner, more disciplined Eurozone—with Greece as a cautionary example.

Berlin will face resistance. But that resistance is more disunited and less well organized than its supporters.

Europe's "Franco-German" engine is dead. Paris can still mount a limited rearguard action. But Germany sets the limits of the possible, thanks in part to a ring of satellite states, more or less integrated into its export-based economy and aligned culturally and politically with it.

The euro crisis long ago vindicated London's profound skepticism about the wisdom of the single currency. But this hasn't increased British influence. If London has an alternative to Germany's vision of Europe, now is the time to present it. (Indeed, as it prepares to vote on leaving the EU, Britain will have to.)

This all leaves pondering Merkel's next move.

Some have suggested that, with Greece humiliated and the rest of the Eurozone cowed into submission, Merkel should now push for European political and fiscal unification on German terms to set the euro on a sound footing.

If she did, Bismarck—who engineered a series of international crises humiliating Denmark (1864), Austria (1866) and France (1870) to bring about German unity under Prussian leadership—might even smile at the wiles of Germany's present chancellor.

For if an analogy with a Treaty of Versailles must be found, that of 1871—when a united Germany was at last proclaimed—is a better bet. Germany's ascendant position in Europe today recalls Prussia's in Germany on the eve of the French defeat at Sedan in 1870 and the European sovereign debt crisis of 2010-15 has left Merkel with a tidy record of humiliations of her own: Greece, Ireland, Portugal, Spain, and Italy.

The next German federal election is due in 2017. Could Europe be united on her watch?

Perhaps Merkel could go to the brink on Sunday because Greece's fate has been secondary all along.

The main aim has been to encourager les autres.

Matthew Dal Santo is a Danish Research Council post-doctoral fellow at the Saxo Institute, University of Copenhagen. Follow him on Twitter at @MatthewDalSant1. This piece first appeared in ABC’s The Drum here.