Get Ready, America and Israel: Iran Is Building Its Very Own S-300 (Well, Maybe) 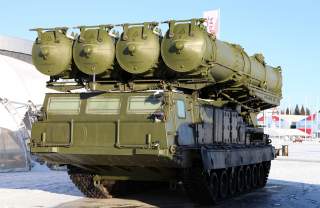 Iran is allegedly gearing up for operational tests of its indigenous Bavar-373 clone of Russia’s S-300 surface-to-air missile defense system. While the Bavar-373 might exist, it is highly unlikely that the weapon comes close to matching the capabilities of any recent version of the Russian S-300. If the Bavar-373 was anywhere near as capable as an S-300, Tehran would have no need to import that weapon.

Apparently, there are five testing stages for the new weapon, three of which have already been carried out. The fourth stage was set to be conducted in the February and March timeframe, but the test was delayed due to technical problems, according to Fars. "Steady work efforts are being made on Bavar-373 missile system and a number of tests have been carried out on this system, and these tests will continue until the date of delivery," Iranian deputy defense minister Brigadier Gen.l Amir Hatami told Fars.

According to Fars, Tehran developed the Bavar-373 after the U.N. imposed sanctions on Iran after the country was found to be working on the development of a nuclear bomb. The Iranians make the highly dubious claim that the Bavar-373 has “superior features over the original Russian model as it enjoys increased mobility, agility and reduced launch-preparation time.”

Indeed, the Iranians are apparently so confident in the Bavar-373—and their follow-on developments called the Talash 2 and Talash 3—that Tehran says it  won’t need to purchase the S-400. “The radar and missile defense system, Bavar-373, is a powerful and fully indigenous supplement for the S-300 defense system which will be put into operation soon,” Brigadier Gen. Farzad Esmayeeli, commander of Khatam ol-Anbia Air Defense Base told Fars. "The S-300 and Bavar-373 systems will be highly lethal for the enemy.”

While the Iranians are certainly projecting an outward image of bravado, Tehran often makes fantastical claims about the performance of its indigenous weapons. It is highly likely that Tehran’s claims about the Bavar-373’s is little more than propaganda.