Get Ready, America: Russia and China Have Space Weapons 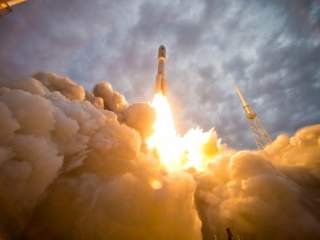 Russia and China are increasingly pursuing the ability to attack America’s space-based assets, but is there anything the Pentagon can do to thwart Beijing and Moscow’s ambitions?

While it is sometimes treated as an afterthought here on earth, space-based capabilities like GPS, communications and reconnaissance satellites are the sinews that hold the U.S. military together, allowing American forces to operate across the globe. That’s a fact, however, that has not gone unnoticed in Beijing or Moscow.

“Adversaries and potential adversaries are developing, and in some cases demonstrating, disruptive and destructive counterspace capabilities. Furthermore, they are exploiting what they perceive as space vulnerabilities—threatening the vital, national, civil, scientific and economic benefits to the U.S. and the global community,” Adm. Cecil D. Haney, commander of U.S. Strategic Command told an audience at the Center for a New American Security on January 22.

The biggest challenges come from rival great powers which have the technical and financial wherewithal to challenge American power in space.

“Last year," Haney said, "the Washington Times reported Russian President Putin as saying that Russia, following the Chinese military, is building state-of-the-art weapons that would ‘guarantee [for] Russia the fulfillment of space defense tasks for the period until 2020.’”

While Russia—and the Soviet Union before it—might have been America’s closest rivals in space, these days the most dangerous challenge comes from Beijing. “China, like Russia, has advanced ‘directed energy’ capabilities that could be used to track or blind satellites, and like Russia, has demonstrated the ability to perform complex maneuvers in space,” Haney said. He added:

“In November, China conducted its sixth test of a hypersonic strike vehicle, and several news sources reported an ASAT the previous month. Of course, many of us are still dealing with China’s 2007 ASAT test, which created more than 3,000 pieces of debris, adding significantly to the congested space environment. Well over 80 percent of this debris, which litters one of the most utilized areas of space, will affect space flight for many decades to come.”

But what can Washington do to counter these developments? The answer to that question is less clear.

“First, we must have a deeper, broader understanding of our adversaries, and potential adversaries. No matter the foe, we must understand their capability and intent, so that we can deny enemy action, hold critical nodes at risk, and prevent perceptions, misperceptions and actions from escalating.”

“Second, we must view and fund space as a critical mission capability vs. an enabler. Our sensors, command and control systems, and Space Situational Awareness capabilities underpin our ability to maintain awareness. These resources are vital to the decision-making process and supporting forces around the globe.”

“Third, we must look at our military capabilities in a holistic manner, and fully integrate them into our other elements of national power. We must have a whole of government approach, and include our allies, partners and commercial entities, where appropriate.”

“Finally, we must increase readiness across the arena of strategic capabilities: nuclear, space, and cyberspace.”

The United States is pursuing other technical solutions as well. Haney explained:

“We are working on several new capabilities, both in low earth orbit and geosynchronous orbit. To enhance our capability of tracking objects in low earth orbit, our Space Fence program will work in conjunction with the rest of our space surveillance network to provide the Joint Space Operations Center or JSpOC, an integrated picture of the joint operating environment, providing significantly improved un-cued space surveillance capabilities.”

“To further refine space situational awareness, we are relocating a C-Band radar to Australia—in order to provide low earth orbit coverage in the Southern altitudes.  A major advance in geosynchronous space surveillance was the declaration of IOC of the Geosynchronous Space Situational Awareness Program that is providing improved situational awareness out to 22,000 miles. . . Future initiatives must build in resiliency and survivability—whether that’s through disaggregation, smaller, less complex satellites or real-time command and control.”

The United States has a long way to go in securing its space-based assets, but Washington is making progress. “While we still have a significant way to go, I am delighted with how far this innovative solution has come. I can’t tell you much of what we are doing due to classification of its operations, but we are experimenting high velocity learning as we experiment in an environment with seamless participation of the DoD and intelligence community,” Haney said.

Ultimately, the United States must rely on deterrence in space, if possible. The key is to make sure that potential adversaries understand that attacking U.S. space assets will come at a significant cost. “At the end of the day, we must ensure that we deter conflict from extending to outer space. As threats evolve, we must continue to look for additional investments in the space portfolio. We simply cannot risk denied access to a domain that is so vital to U.S. national security,” Haney said. But if the worst should happen, “I am proud to tell you that U.S. Strategic Command is a ready force, capable of delivering comprehensive warfighting solutions for our commander in chief, should deterrence fail. Should we need to respond, we will respond proportionally, using all elements of our national power, and that response will occur at a time, domain, and place of our choosing.”

Essentially, the message from Washington is that an attack on U.S. space systems does not necessarily mean a response in kind. Like any other aggressive act, the United States has the means to respond in many different ways—including conventional military strikes. Which means an attack on a satellite might be met with a Tomahawk cruise missile launched at an enemy’s staging area.