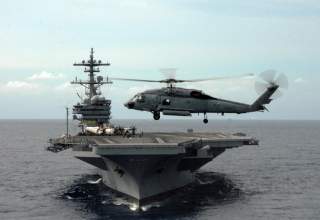 A preliminary agreement between Washington and New Delhi to share military logistics marks another step forward in their defense relationship, assuming the agreement is soon formalized.

The two sides have been discussing the Logistics Supply Agreement (LSA) as well as two other so-called “foundational defense agreements,” the Communications Interoperability and Security Memorandum of Agreement (CISMOA) and the Basic Exchange and Cooperation Agreement (BECA), for the last decade.

The announcement of the agreement was made this week during U.S. Defense Secretary Ash Carter’s three-day visit to India, part of a two-week trip that also includes stops in the Philippines, United Arab Emirates, and Saudi Arabia.

The logistics agreement, which will formally be called the Logistics Exchange Memorandum of Agreement (LEMOA), will allow both countries to access each other’s supplies, spare parts, and services from military bases and ports, making it easier to coordinate their military activities. In the past, India has provided logistics assistance to the U.S. on a case-by-case basis.

The previous Manmohan Singh government balked at signing the foundational defense agreements. This was largely due to the influence of former Defense Minister A.K. Antony—a left-leaning politician with little interest in enhancing ties with the U.S. and who was loath to pursue policies that might irk the Chinese.

There has always been underlying concern in India that signing the agreements would somehow sacrifice India’s military independence and provide the U.S. with too much information on India’s operational abilities and practices.

Such concerns are magnified by the U.S. continued close relationship with Pakistan. In fact, some observers feared that the Obama administration’s recent announcement to provide Pakistan with eight additional F-16 aircraft, despite India’s strong objections, could impact New Delhi’s decision on whether to sign the defense agreements.

The announcement of a preliminary logistics agreement thus sends a positive signal on the overall trajectory of their defense relationship, while stopping short of conveying a major breakthrough.

The announcement of the F-16 sale notwithstanding, there has been a qualitative improvement in U.S.-India relations under the Modi government, with most progress occurring on the defense front.

Carter has been a driving force behind this effort, especially through advancement of the Defense Trade and Technology Initiative (DTTI) aimed at breaking down bureaucratic and other barriers to U.S.-India defense trade and cooperation.

The U.S. Congress also is pushing for stronger U.S.-India defense ties. In March U.S. Representative George Holding, R., N.C., introduced the U.S.-India Defense Technology and Partnership Act. The legislation lays out specific steps for enhancing defense ties between the two countries, including designating a point person to coordinate the interagency policy process regarding defense trade and technology transfer with India; facilitating the transfer of advanced technology for combined military planning; coordinating with India on contingency planning on mutual security threats; and amending the Arms Export Control Act to streamline the export control process for India, putting it on par with NATO countries and other key U.S. military allies.

Some U.S. strategists may be skeptical of the idea of treating India the same as a NATO partner or treaty ally, but Washington must increasingly factor in the evolving security situation with regard to China and the need for countries like India to play a key role in helping to maintain the balance of power in Asia. To fulfill this role, India needs adequate defense capabilities and access to advanced military technology.

Last December Carter said U.S.-India defense ties could provide an “anchor of global security.” This week’s visit and the preliminary agreement on sharing military logistics represent a modest step toward the realization of the Defense Secretary’s worthy vision.