Get Ready, China: The U.S Navy's Possible 'Stealth-Slayer' Is Coming to Asia 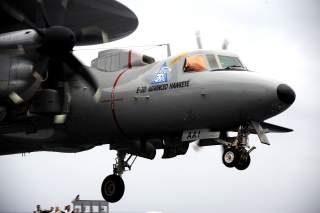 The U.S. Navy’s most advanced airborne surveillance aircraft will be permanently deployed to Japan starting in February.

“These moves are in accordance with the Navy’s strategic vision for the rebalance to the Asia-Pacific, a plan to put the most advanced and capable units forward in order to support the United States’ commitment to the defense of Japan and the security and stability of the region,” reads a U.S. Navy statement.

The addition of the E-2D is significant because it is the lynchpin of the Naval Integrated Fire Control – Counter Air construct that eventually allow every U.S. Navy air or sea-based asset to seamlessly function as a sensor or shooter within a network. As Rear Adm. Mike Manazir described its some time ago—the aircraft is the “central node” of the entire system.

The E-2D is the Navy’s primary means of defending against low-observable cruise missiles, ballistic missiles and enemy aircraft. And, indeed, given the capabilities of its UHF-band radar, the E-2D may be the Navy’s trump card against future Russian and Chinese stealth aircraft.

That would include aircraft like the Chengdu J-20, Shenyang J-31, Sukhoi PAK-FA and, indeed, the United States’ own Lockheed Martin F-22 Raptor and tri-service F-35 Joint Strike Fighter. Only very large stealth aircraft without protruding empennage surfaces—like the Northrop Grumman B-2 Spirit or the forthcoming B-21 Raider Long Range Strike Bomber—can meet the requirement for geometrical optics regime scattering. Effectively, that means the E-2D’s AN/APY-9 radar can see stealth aircraft like the J-20 or J-31.