Get Ready, ISIS: America's Lethal B-52 Bomber Is Coming For You 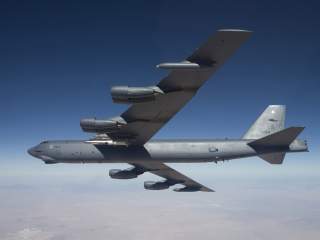 The Pentagon has few weapons as iconic and fearsome—not to mention as old—as the B-52 Stratofortress. Now the U.S. Air Force plans to send the bombers to strike the Islamic State.

Air Force Gen. Herbert Carlisle, head of Air Combat Command, made the announcement at the Air Force Association’s annual Air Warfare Symposium on February 26. Lt. Gen. Charles Brown, in charge of the flying branch’s top headquarters for the Middle East, said he would help “bring B-52s to town,” according to Air Force Magazine.

The eight-engine aircraft will take over from the sleeker B-1 “Bone” bombers, which halted bombing runs in Iraq and Syria in January. The Air Force pulled the B-1s from Al Udeid Air Base in Qatar to give their crews some much needed rest and to fit important upgrades to the aircraft.

Less than a month after the first air strikes against Islamic State in August 2014, observers spotted the Bones flying missions over Iraq and Syria. In December, the swing-wing jets supported the Iraqi army during an offensive to retake Ramadi.

“We’ve got B-1s in this fight, and when we find obstacles that we know we can hit, we’ll strike them from the air as well to try and disable them,” Pentagon spokesman U.S. Army Col. Steve Warren said in a December 24 interview on CNN. “B-1s are evolving into a very effective close air support platform.”

Despite the symbolism, these warplanes are not engaged in carpet bombing. Since the B-1’s entrance in the war, they’ve dropped precision-guided Joint Direct Attack Munitions precisely onto Islamic State positions. When they arrive, the B-52s are likely to fly the same sort of missions.

On May 18, 2015, two B-52Hs conclusively demonstrated their ability to do just that in Jordan. The aircraft flew a non-stop round trip from Barksdale Air Force Base in Louisiana to Wadi Shadiya and back for a training exercise, racking up 30 hours of flying time and traveling 14,000 miles in the process.

During the mission, the bombers dropped strings of JDAMs in a mock attack over a practice range.

Though they might seem smaller than the B-52s, the Bones can carry as much as 75,000 pounds of bombs—more than their 1960s counterparts. Able to fly tens of thousands of feet high, both bombers can easily stay out of range of the Islamic State’s small anti-aircraft guns and short range, shoulder-fired anti-aircraft missiles.

The more vexing problem is coordinating with Iraqi and other friendly troops on the ground. With few American forces in the country, the Pentagon has had a hard time confirming that bombs and missiles are hitting their intended targets.

While safe from enemy fire, bombers flying high in the sky can have difficulty finding their mark. In June 2014, a B-1 accidentally killed five American commandos and an Afghan soldier in Afghanistan. Another Air Force pilot recounted a similar story where another Bone nearly killed a contingent of British troops in 2007.

Of course, the relatively fast-moving pace of aerial combat and the general confusion of battle can still cause problems for low-flying aircraft. On March 13, 2015, two A-10 ground attack planes killed at least four civilians in Iraq after mistakenly assuming they were Islamic State fighters. The Pentagon only investigated the incident after a survivor came forward seeking reimbursement for her destroyed SUV.

Even after the B-1s returned home, the Air Force was still unsure of whether the older B-52s would take their place. “A B-52 deployment is not part of the mix of B-1B substitutes being considered,” Air Force Lt. Gen. John Raymond, the service’s deputy chief of staff for operations, told Air Force Magazine on January 21.

Despite their age, the B-52s have received significant upgrades for their communications equipment, targeting gear and other systems. Despite being a half-century old, the combat-ready aircraft regularly appear in training exercises around the world.