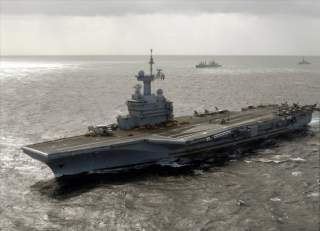 Here’s how to put the scale of Islamic State’s attacks into perspective. Within a span of few weeks, the radical Islamist group carried out the deadliest terror attack in modern French history, killing 129 people, and the deadliest attack in modern Turkish history — the Oct. 10 Ankara bombing, which killed 102.

Between the two, I.S. blew up a Russian passenger jet over the Sinai, killing 224. Another 44 people died in suicide blasts in a Hezbollah-controlled Beirut neighborhood, the worst terror attack in the city since the end of the Lebanese civil war. A drumbeat of suicide bombings in Baghdad killed dozens.

In other words, Islamic State has launched a war on the civilian populations of all its major adversaries — NATO, Russia, Iraq and an Iranian ally.

A day after the Paris bloodbath, French Pres. François Hollande called the murders “an act of war that was committed by a terrorist army, a jihadist army, Daesh, against France.” French Prime Minister Manuel Valls vowed to “annihilate the enemies of the republic.”

All of Islamic State’s enemies will likely strike back hard. But don’t underestimate France. Its military has been one of the most aggressive in battling Islamist groups from Mali to Afghanistan.

France has been at war with Islamic State since September 2014 under the name Operation Chammal. Paris can call on the aircraft carrier Charles de Gaulle — due to arrive Nov. 18 near the Middle East to support the war — and her assortment of Rafale and Super Etendard strike aircraft. A French two-star general is also attached to U.S. Central Command.

But we should expect any French response to be limited as the French military is relatively resource-poor. At the same time, its highly-skilled expeditionary units are “general-purpose forces with a long-standing expeditionary mission and outlook” derived from France’s colonial history, according to Michael Shurkin in a 2014 RAND study.

All combined, this means French officers learn to do more with less — though they would like to have more resources — and accept a higher level of risk than their American counterparts. The French army, for example, often has to make do without satellites, drones or advanced surveillance aircraft.

In fact, the old-fashioned French military has tried to deliberately unlearn tactics handed down by the Americans in Afghanistan, where French combat troops fought until 2012. Kurdish troops in Iraq have also praised French air strikes for their accuracy to War Is Boring.

If we shouldn’t underestimate France, we also shouldn’t overestimate the country’s ability to defeat Islamic State. The war in Iraq and Syria is the world’s bloodiest ongoing conflict — and there’s little appetite or capability for France to expand far beyond the current advise-and-assist mission.

But it could expand behind the scenes. French troops have quietly deployed to Iraq in the past year to conduct advising and training programs for Iraqi and Kurdish soldiers. It could send weapons to allies — such as more U.S.-made but French-donated M-2 machine guns in service with the Kurdish peshmerga. Paris could bolster its land-based warplanes in the region, but this would stretch a tight defense budget.

More air strikes may not be necessary. Coalition air strikes have been on an upward trend, with 2,670 “weapons released” in October, according to U.S. Central Command. This number has not dropped below 2,000 since July.

At the same time, there are fewer targets to bomb as Islamic State has abandoned fixed positions and takes to operating mainly at night. Then there’s the ever-present problem of how to correctly identify targets in the first place. And that’s something the United States with all its intelligence, surveillance and reconnaissance hardware struggles with in Iraq and Syria.

In other words, France may escalate its role — more air strikes, more weapons supplied to friendly troops — but is unlikely to fundamentally change the war’s characteristics. That’s something no country can do on its own.

Instead, the most significant changes may be at home. And this was underway before the terror attacks in Paris. In January, Islamist gunmen murdered people in the offices of satirical newspaper Charlie Hebdo and at a Jewish grocery store.

Which is to show Islamic State is not just a regional threat in Iraq and Syria — but an international one. The identities of the terrorists who gunned down handicapped concertgoers is still unclear, but they appear to be a mix of French citizens and militants from the Middle East.