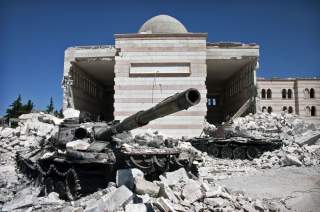 The Syrian conflict, now in its fourth, unrelenting year, is an unmitigated disaster. By any measure – strategic, humanitarian, political, social or environmental – the conflict has ravaged the Middle East.

The humanitarian toll is overwhelming. Over a quarter of a million are dead and half of the country's population is displaced. While there are coalition air strikes against ISIS-held territory, there is no cogent military strategy. Though there has been a flurry of diplomatic activity recently, no political agreement is on the horizon either.

No one could have predicted that what started as peaceful protests against Assad's authoritarian regime could spiral so thoroughly out of control and lead to the establishment of ISIS and the fracturing of the Syrian state. The world continues to lament the state of Syria but has been unable to muster any solutions.

In time, there will likely be no more Syria.

The worst-case scenario is that Syria's slow, violent burn continues unabated for years to come, accelerating related regional crises. The best-case scenario is a more orderly disintegration of the state, a crumbling that has already begun. This has far-reaching consequences for the entire region, yet the focus continues to be on the rise of ISIS to the exclusion of other deep-seated issues driving the conflict.

The Syrian conflict is so confounding and disruptive because it's not just a product of levers and forces internal to Syria. It's also not just a problem of how to deal with ISIS. Rather, Syria has become the lightening rod for all of the ills of the region. It has become the place of convergence for regional and international rivalries, religious apocalyptic visions, the lack of human security, demographic challenges, the inevitable social and political effects of decades of authoritarianism and the lack of broad-based legitimacy of political elites, social and religious movements.

A multitude of proxy conflicts and parochial interests is being played out in Syria, and it is unlikely that all of them can be encapsulated in a lasting political settlement.

Iran and Hezbollah, while allies of Assad, have their own priorities in Syria – like securing the Lebanese border and other Shia-dominated areas. They have been less interested in helping the regime retake Sunni strongholds, effectively forcing Assad to cede territory. Turkey has condemned the Assad regime but has for years done little to stem the flow of foreign fighters into Syria. It has contradictory interests in ousting Assad while maintaining the territorial integrity of Syria so that Syrian Kurds along its border do not get any smart ideas about breaking off to form an independent Kurdistan. Iraq, itself a fractured state, has competing interests in Syria depending on which sectarian faction its power players belong to. Various Gulf states have come out against Assad while cavalierly supporting extreme rebel factions.

Though it's always dangerous to discuss absolutes, especially in the world of international relations, there is no feasible political or military solution ahead for Syria. Even with the recent spasm of diplomatic activity by Russia, the US and the Gulf states, there is no real shift in positions, and any agreement would be unlikely to include ground held by ISIS, leaving a large swath of territory unaccounted for.

The latest UN Security Council statement, urging the formation of a transitional government, still makes no mention of the key issue: what should be done about the Assad regime. Until there is an international consensus on whether Assad's ouster is a precondition for a deal, an internationally brokered solution will not happen.

Likewise, there is no cogent military option despite the fact that most actors on the ground still believe there is more to be gained by fighting rather than negotiating. The so called 'moderate Syrian rebels' are non-existent. That is a wishful label attached to a group of fractured and not so moderate fighters. The recent US campaign of drone strikes has so far failed to perceptibly roll back territory held by ISIS. Nor has the half-hearted US-led military campaign prevented the Assad regime from carrying out its own devastating strikes in rebel-held territory that purposefully targets civilians. The attack this week on Douma, a suburb of Damascus, by Syrian Government forces was one of the deadliest of the four-year war.

No one actor has mustered enough force to regain control of Syria and the current US led military 'strategy' has not decisively shifted the course of the conflict. So Syria will continue down a slow path towards fragmentation, likely dragging Iraq along with it. ISIS is consolidating territory to the east along and across the Iraqi border. In the north, Kurdish rebels are pushing their luck, seeing how far they can further their claims of autonomy while creating facts on the ground, supported by their Iraqi counterparts. The Assad regime, meanwhile, is concentrating its strength in the capital and along the coast.

It's this overall fracturing, more so than the panic over ISIS, which is the real threat to regional stability.