Get Ready, NATO: The Russian Army Is Getting New T-90M Main Battle Tanks 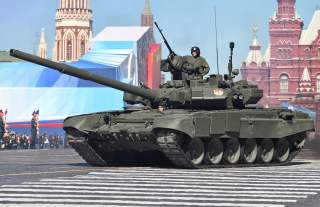 The Russian Ground Forces are set to receive their first batch of upgraded T-90M main battle tanks. Initially, one tank battalion will be re-equipped with the upgraded machines in the coming months.

“Within months we will be able to say that T-90M will be authorized for service. The first batch will be enough for rearming a tank battalion,” Uralvagonzavod told the Russian TASS news agency.

“The state program for armaments envisages the acquisition of these tanks throughout the period it will be effective in amounts determined by the customer."

The T-90M has a number of improvements over the original version of the tank—particularly in terms of targeting and protection.

"Its new modular dynamic protection enhances resistibility to modern means of attack and is highly repairable. The electromagnetic protection is a safeguard against magnetometric fuse mines," Uralvagonzavod told TASS.

Nonetheless, the T-90M will not become the dominant tank in the Russian military. Instead, the much upgraded—and low cost—T-72B3M will become the mainstay machine within Russia’s armed forces. The reason is simple; the T-90M does not offer enough of an improvement over the T-72B3 for the cost it incurs.

“There are quite few T-90s in the force and the T-90 does not dramatically improve on the capabilities of the T-72B3M,” Michael Kofman, a research scientist focusing on the Russian military at the Center for Naval Analyses, told The National Interest. “The T-90 is just a T-72 variant to begin with. It doesn't matter how many letters you add to it.”

Thus, the Russians are likely to upgrade their existing stocks of T-90A model tanks to the improved T-90M standard, but the machine will not become the dominant force in the Kremlin’s arsenal. However, the T-90M could find buyers on the export market—both as an upgrade for existing vehicles and as new build machines. Thus, countries such as India—which has an enormous T-90 fleet—could be potential markets for the T-90M upgrade.

As for the next generation of tanks for Russia, the T-14 Armata will eventually enter production and enter service. But it remains to be seen if Russia will mass produce the Armata for all of its ground forces or simply confine the expensive new tank to certain elite units. The most likely scenario is that the T-72B3M will be the mainstay of the Russian army for the foreseeable future while the T-90M and T-14 play relatively niche roles.