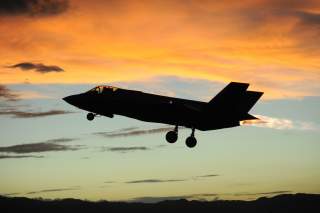 The F-35’s Distributed Aperture Sensor (DAS) has performed airborne identification and target tracking of a ballistic missile in a test off the coast of Hawaii as part of ongoing development of the 5th-generation aircraft’s ability to conduct airborne ballistic missile defense missions.

According to Northrop engineers and weapons developers involved with the test, a sensor on the ground transmitted its tracking information to the DAS-equipped Airborne Gateway, which formed a three-dimensional space track which could be transmitted to San Diego.

“DAS can perform its mission whether airborne in an F-35 or other aircraft, as well as on the ground or in a ship. In this case, the two DAS sensors in the air and on the ground, respectively, were able to individually recognize the ballistic missile event and generate a two-dimensional track,” Northrop experts told Warrior.

Although the test was in 2014, it has only now been determined that the F-35 can perform BMD - due to years of analysis and test data examination, Northrop developers said. Such a defensive technical ability is of great relevance currently, as many express concern about North Korea short and medium range ballistic missile threats.

An airborne DAS, networked with ground-based Patriot and THAAD (Terminal High Altitude Area Defense) weapons, could offer a distinct tactical advantage when it comes to quickly locating incoming missile threats. Air sensors in particular, could be of great value given that, in some envisioned threat scenarios, it is unclear whether there would be enough interceptors to counter a massive North Korean ballistic missile barrage into South Korea. Accordingly, air based detection and target tracking, it seems, could go a long way toward better fortifying defenses - as they might increase the time envelope during which command and control could cue interceptors to locate and destroy attacking enemy missiles.

Using early applications of artificial intelligence, computers and aircraft relied upon advanced algorithms to organize sensor information - which was then transmitted to a pilot.

As a key element of the F-35s much-discussed “sensor fusion technology,” the DAS draws upon a 360-degree sensor field of view generated by six cameras strategically placed around the aircraft. The sensor autonomously fuses data from all of the sensors into a single field of view for the pilot.

“With an automated picture, we can get the pilot everything he needs without him needing to go through every step,” Bama said.

An MDA statement said program officials have been evaluating system performance based upon telemetry and other data obtained during the test.

As part of this emerging technical configuration, it has been determined that the F-35s DAS can perform a wide range of non-traditional ISR functions to include not only BMD but other kinds of air or ground-fired enemy weapons. This includes an ability to detect artillery fire, enemy fighter aircraft, incoming air-launched missiles and, of course, ground launched rockets and missiles.

“DAS provides imagery. Instead of looking through a tube, this is a broader perspective of the combat environment, allowing a pilot to act more decisively. It provides a protective bubble to ensure that no aircraft can approach an F-35 without the F-35 knowing it is there,” Montgomery added.

Weapons developers describe this technical advance in terms of something entirely compatible with ship-based Aegis radar, which is also configured to perform BMD functions. Aegis radar was used to track the ballistic missile target as well.

The concept is to give commanders a better window for decision-making and countermeasure applications when faced with approaching enemy fire. The Navy’s layered ship defense system, involving SM-3s, ESSMs, SeaRAM, Rolling Airframe Missiles and closer-in systems such as Close-in-Weapons System using a phalanx area weapon, can best track and destroy targets when a flight path of an attacking ballistic missile can be identified earlier than would otherwise be the case.

The Navy and Lockheed have specifically demonstrated this system using an F-35 as an airborne sensor relay platform. NIFC-CA can be used both offensively and defensively, as it draws upon the SM-6s active seeker which can discern and attack fast-maneuvering targets.

The Navy is already building, deploying and testing a fleet of upgraded DDG 51 Arleigh Burke-class destroyers with NIFC-CA - as a way to bring an ability to detect and destroy incoming enemy anti-ship cruise missiles at farther ranges from beyond the horizon.

NIFC-CA has previously operated using an E2-D Hawkeye surveillance plane as an aerial sensor node; it has also been successfully tested from a land-based "desert ship" at White Sands Missile Range, N.M. from an F-35 Joint Strike Fighter. Should the Navy's future plans materialize, the system would expand further to include the F/A-18 and F-35C.

NIFC-CA gives Navy ships the ability to extend the range of an interceptor missile and extend the reach sensors by netting different sensors of different platforms -- both sea-based and air-based together into one fire control system, Navy developers told Warrior.

NIFC-CA was previously deployed on a Navy cruiser serving as part of the Theodore Roosevelt Carrier Strike Group in the Arabian Gulf.

Operating NIFC-CA from an F-35B improves the sensor technology, reach, processing speed and air maneuverability of the system; previous tests have also assessed the ability of the system to identify and destroy air-to-air and air-to-surface targets. A report from earlier this year from the U.S. Naval Institute news quoted Lockheed officials saying an "at-sea" assessment of this NIFCA-CA/F-35 pairing is planned for 2018.

NIFC-CA has previously operated using an E2-D Hawkeye surveillance plane as an aerial sensor node; the use of an F-35B improves the sensor technology, reach, processing speed and air maneuverability of the system; the test also assessed the ability of the system to identify and destroy air-to-air and air-to-surface targets. A multi-target ability requires some adjustments to fire-control technology, sensors and dual-missile firings; the SM-6 is somewhat unique in its ability to fire multiple weapons in rapid succession. An SM-6 is engineered with an "active seeker," meaning it can send an electromagnetic targeting "ping" forward from the missile itself - decreasing reliance on a ship-based illuminator and improving the ability to fire multiple interceptor missiles simultaneously.

Unlike an SM-3 which can be used for "terminal phase" ballistic missile defense at much farther ranges, the SM-6 can launch nearer-in offensive and defensive attacks against closer threats such as approaching enemy anti-ship cruise missiles. With an aerial sensor networked into the radar and fire control technology such as an E2-D Hawkeye surveillance plane or F-35, the system can track approaching enemy cruise missile attacks much farther away. This provide a unique, surface-warfare closer-in defensive and offensive weapons technology to complement longer range ship-based ballistic missile defense technologies.

The NIFC-CA technology can, in concept, be used for both defensive and offensive operations, Navy officials have said. Having this capability could impact discussion about a Pentagon term referred to as Anti-Access/Area-Denial, wherein potential adversaries could use long-range weapons to threaten the U.S. military and prevent its ships from operating in certain areas -- such as closer to the coastline.

Having NIFC-CA could enable surface ships, for example, to operate more successfully closer to the shore of potential enemy coastines without being deterred by the threat of long-range missiles.

The first new DDG 51 to receive Baseline 9 technology was the USS John Finn or DDG 113. The ship previously went through what’s called “light off” combat testing in preparation for operational use and deployment.

The very first Arleigh Burke-class destroyer, the USS Arleigh Burke or DDG 51, is now being retrofitted with these technological upgrades as well.

NIFC-CA technology is also being back-fitted onto earlier ships that were built with the core Aegis capability. This involves an extensive upgrade to combat systems with new equipment being delivered. This involves the integration of new cabling, computers, consoles and data distribution systems.

Existing destroyers and all follow-on destroyers will receive the Aegis Baseline 9 upgrade, which includes NIFC-CA and other enabling technologies.  For example, Baseline 9 contains an upgraded computer system with common software components and processors, service officials said.

In addition, some future Arleigh Burke-class destroyers such as DDG 116 and follow-on ships will receive new electronic warfare technologies and a data multiplexing system which, among other things, controls a ship’s engines and air compressors, developers said.

The new radar, called the SPY-6, is said by Navy officials to be 35-times more powerful than existing ship-based radar.

Flight III Arleigh Burke destroyers are slated to be operational by 2023.