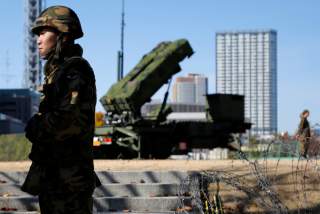 This week, Japan’s Defense Ministry submitted its budget request for fiscal year 2018, which begins in April. The request asks for a defense budget of around $44 billion, about a 2.5 percent increase from 2017.

As Aviation Week, a trade publication, noted, the largest spending category in the budget request is for missile defense. Specifically, Japan’s defense ministry is requesting about $1.59 billion for missile defense systems next year. This includes funding for three separate systems: Aegis destroyers, Patriot Pac-3 and exploratory work on the Aegis Ashore system that Japan is considering.

With regards to Japan’s sea-based defense systems, Aviation Week reports that the budget asks for upgrades to the destroyers and the purchase of Raytheon SM-3 Block IIA and Block IB interceptors to arm them. The defense ministry is also looking to boost its Patriot Pac-3 systems via the Missile Segment Enhancement (MSE), which improves the interceptors’ range, mobility and precision. The budget also requests funding for FPS-3, FPS-5 and FPS-7 ground-based early-warning radars and improvements in command-and-control infrastructure, according to Aviation Week.

The budget only asks for $6.3 million in funding for the Aegis Ashore system. Still, Japan’s defense minister, Itsunori Onodera, recently confirmed that Tokyo intends to deploy two Aegis Ashore systems, and said the early funds will go towards geological surveys, deployment-plan design and other related expenses. Speaking more generally about missile defense, Onodera said: “There is a need to strengthen our capability to regularly and sustainably defend all of the country as soon as possible at a time when North Korea is building up its ballistic missile capability.” Two North Korean ballistic missiles overflew Japan in tests this year.

Japan has built one of the most advanced missile-defense systems in the world since first investing in it in the 1990s, as China and North Korea were building up their respective missile arsenals. Like the United States, it has pursued a multitiered approach, with capabilities to intercept ballistic missiles during different phases of flight (ballistic missiles have three phases: boost, midcourse and terminal).

Tokyo’s first line of defense comes from its Aegis-equipped destroyers. Japan’s Navy operates four Aegis-equipped Kongo-class destroyers, and is also building two new destroyers with a more advanced Aegis system, as well as upgrading its two current Atago-class destroyers with ballistic-missile defense capabilities. Aegis-equipped ballistic-missile defense vessels seek to intercept intermediate-range ballistic missiles during their midcourse phase, primarily relying on variants of the Standard Missile-3. The SM-3 Block IIA interceptor, for which Japan’s defense ministry is requesting funds, is the newest and most advanced interceptor. It was jointly developed by Tokyo and Washington and expands the range and speed of the interceptor. The SM-3 Block IB that Tokyo is also purchasing is older than the Block IIA, but has improved seeker technology compared with the Block IA. This gives it the ability to better discriminate between warheads and decoys.

If Japan’s Aegis-equipped ships fail to intercept a ballistic missile, Tokyo would turn to its Patriot Pac-3 systems. These mobile systems would be deployed to protect high-value targets like military bases or cities. The Pac-3 systems use hit-to-kill interceptors to intercept ballistic missiles during their final, terminal phase. Although the Missile Segment Enhancement (MSE) system potentially doubles the range of the interceptors—reportedly to about thirty-five kilometers (21.5 miles)—as well as the altitude, the Patriot systems still intercept missiles late in flight.

That is one of the reasons Japan is looking to augment it with the ground-based version of the Aegis system. Aegis Ashore is a new system developed by the United States to defend Europe. The first Aegis Ashore system was deployed in Romania in 2016, with another future site in Poland. Like its sea-based counterpart, the Aegis Ashore intercepts missiles during their midcourse phase. According to CSIS’s Missile Defense Project, the Aegis Ashore system “incorporates land-based versions of the various components used on Aegis ships, including the deckhouse, AN/SPY-1 radar, the Mark 41 Vertical Launching System (VLS), and Standard Missile-3 (SM-3) interceptors.” Two of the systems would be needed to cover all of Japan.

There have also been numerous reports that Japan is seeking to procure air-launched cruise missiles for its F-35 Joint Strike Fighters, which could be used to conduct offensive operations against North Korea’s missile sites. However, when discussing Tokyo’s interest in cruise missiles, Defense Minister Onodera implied they would primarily be useful in dealing with Chinese threats to the Senkaku Islands. “With the introduction of stand-off missiles . . . we can deal with naval or land units of an enemy invading our country from beyond their detection range,” Onodera said. He added: “The stand-off missiles we are introducing at this time are purely for our national defense and are not for the purpose of attacking enemy bases.”

There are conflicting reports about whether the defense ministry’s budget request actually asks for funds for the cruise missiles. If so, it would be a significant departure from Japan’s post–World War II military posture, which has eschewed offensive strike capabilities under its pacifist constitution. Still, without cruise missiles Japan’s F-35s can enhance missile defense if they are integrated with Tokyo’s Aegis systems to provide better radar and tracking capabilities.