Get Ready, Russia and China: Is This the First Step Towards a New U.S. Supersonic Bomber? 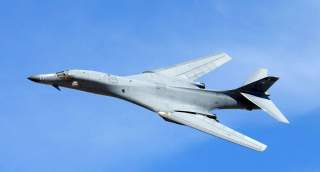 Lockheed Martin and NASA have begun wind tunnel testing on a preliminary design for a Quiet Supersonic Technology (QueSST) X-plane. While the technology is geared toward civilian applications, quiet supersonic technology could have potential military applications on a future long-range supersonic bomber.

NASA is currently testing a nine percent scale model of the company’s X-plane design at the Glenn Research Center’s 8-foot by 6-foot supersonic wind tunnel. Over the course of the next two months, NASA and Lockheed engineers will test the model at wind speeds ranging from about 150mph to 950 mph—or Mach 0.3 to Mach 1.6. The testing should afford engineers a better understanding of the aerodynamics involved well as aspects of the propulsion system. The goal is to eventually fly supersonically over land in a QueSST X-plane without causing the typical supersonic boom produced by current aircraft.

“We’ll be measuring the lift, drag and side forces on the model at different angles to verify that it performs as expected,” said Ray Castner, the aerospace engineer leading propulsion testing for NASA’s QueSST program. “We also want make sure the air flows smoothly into the engine under all operating conditions.”

Modern aerospace engineering research has demonstrated that a supersonic aircraft can be shaped so that the shock waves it generates while flying at supersonic speeds are quiet enough at ground level so as not be noticed.

The QueSST program—and its test efforts—are the key to one day developing aircraft that can routinely operate at supersonic speeds overland. “This test is an important step along the path to the development of an X-plane that will be a key capability for the collection of community response data required to change the rules for supersonic overland flight,” Dave Richwine, NASA’s QueSST preliminary design project manager.

Lockheed Martin won the NASA contract for the QueSST preliminary design phase in February 2016. According to the company, wind tunnel testing and analysis will likely continue until about the middle of 2017. If Congress approves continued funding, NASA will hold another award another contract for the final design, fabrication, and testing of the low-boom flight demonstration aircraft. If the program proves successful, it could revolutionize the aviation industry.

While QueSST program is aimed at developing a long-range quiet supersonic transport, the same technology could be applied to a long-range supersonic bomber. Thus while QueSST is a civil aviation program, it is a program the national security community should be watching.