Get Ready for a World without Work 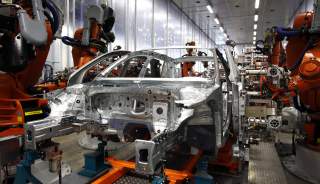 In his last Reddit post, Stephen Hawking warned that the rise of artificial intelligence (AI) could tear society apart. Dr. Hawking’s words should inspire caution in all who deal with AI. Fortunately, however, this challenge is not unprecedented. U.S. officials should heed lessons learned at home and abroad over past industrial revolutions. It’s too soon to tell whether AI means the end of human labor. But it’s time for the American government to prepare the country for the worst: a world without work.

The exact scope of the disruption caused by AI is hard to forecast. Many analysts predict that AI will permanently displace large numbers of workers. The Boston Consulting Group, for instance, forecasts that robots may perform up to 25 percent of manufacturing jobs worldwide by 2025. PwC assessed that 38 percent of jobs in the United States are at high risk of being replaced by AI in the next fifteen years. Others are optimistic. They argue that while AI will make some forms of human labor obsolete, new jobs will absorb displaced workers.

It’s too soon to say who will be right. But whichever prediction ultimately bears closer to the truth, the United States is in for a long and turbulent ride. New jobs may indeed emerge to replace old ones taken by AI. Even if they do, however, there will be long periods during which millions of Americans in manufacturing and other industries suddenly find themselves without work, since AI will take jobs faster than they can be replaced.

The U.S. government’s roles during this turbulent period will be threefold. First, elected representatives should get ready to provide relief for large numbers of Americans who suddenly find themselves without work. Like their New Deal–era predecessors, they should know that this isn’t about giving lazy workers a free ride. It’s about making sure Americans are ready to work—and keeping them from rioting—long enough for the economy to adjust.

Next, U.S. policymakers should redouble efforts to train rising generations and technologically displaced workers to compete in a more advanced economy. This will entail greater—though not exclusive—focus on computer programming, robotics engineering and related skill-sets. Here, too, there are historical parallels. Japan’s Meiji Restoration is a prime example.

As former Japanese prime minister Okuma Shigenobu wrote in 1900: “One of the principal measures adopted by the Restoration government, with the object of promoting the national prosperity and enlightenment, was the education…of the young as well as of grown men.” This emphasis on education made Japan a global competitor in the early 1900s. The same rededication to education will be needed if Americans are to compete in an AI-dominated economy.

Temporary relief followed by education might be enough to transition American workers from an information-based economy to an automated one—especially if the new jobs forecasted by optimists come quickly. But it is equally possible that it will fall short. The AI revolution could leave millions unemployed for many years, or permanently, as Dr. Hawking warned. If it does, American society may be forced to rethink its social welfare system, beyond temporary relief for displaced workers.

The fate of American democracy will be on the line. Most Americans—both Democrats and Republicans—already say that the nation’s distribution of wealth is unfair. That majority will only grow as more and more citizens see their jobs robotized and as companies that replaced them enjoy larger windfalls. Mass public discontent as a result of rapid industrialization is not new. Nor are the risks it poses.

Those risks were successfully mitigated in many cases. The British government headed off political unrest in the early nineteenth century by giving in to workers’ demands for improved labor conditions, social welfare and political representation. The U.S. government did similarly. The original Progressivism was a direct response to urban activism and the threat of spreading unrest if workers’ demands weren’t met.

In other cases, however, nations failed to address these risks until it was too late. One of the drivers of the Russian Revolution of 1917 was the profound dissatisfaction of the working class. A lack of labor rights, safe and sanitary work and living conditions, and reforms by the Tsarist regime helped drive Russians into the streets. There is little reason—yet—to predict revolution as a result of AI’s arrival in America. But it would be irresponsible to dismiss risk of mass unrest if the rise of AI leaves American workers unable to work and live dignified lives.

The United States must seize the initiative if it is to remain the world’s leading power in an era of AI. It may be too soon to forecast exactly what a world of proliferated AI will look like. But it is not too soon to lay the foundations for an American society that can survive—and thrive—in an era of artificial intelligence.

Alexander Velez-Green is a research associate at the Center for a New American Security.