Getting The Most From The Army’s Humvee Fleet 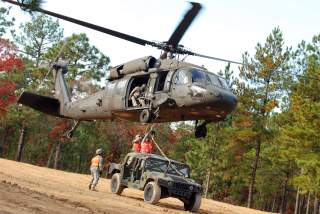 The tragedy of Hurricane Harvey provided a clear demonstration of the National Guard’s role in responding to natural disasters and domestic crises. The entire Texas Guard contingent has been deployed along with units from more than a dozen states. Nearby states have provided additional Army Guard units and equipment while those farther away such as New York, Connecticut and Alaska have sent Air Guard helicopters and fixed-wing aircraft. Overall, the National Guard’s response demonstrates the value of each state possessing a uniformed military response capability to natural or man-made disasters.

One of the most effective pieces of equipment available to the Guard to deal with the aftermath of Hurricane Harvey is the venerable HMMWV, or Humvee. The Texas Guard is operating more than 200 Humvees alongside those from units deployed by other states. The Humvee is particularly well suited to the conditions created by hurricanes and other natural disasters. The basic Humvee is a carrier vehicle, with a payload capacity that ranges from 4,000 to 5,000 pounds, able to move people, equipment and supplies. The shelter variant provides a mobile platform that can house communications equipment or even a basic medical unit. There is also a special ambulance variant that can evacuate those in need of medical attention.

The rollout of Humvees as part of the National Guard’s response to Hurricane Harvey comes at an interesting time. The U.S. Army is struggling to come up with a long-term strategy for managing its light tactical vehicle fleet. Today’s fleet consists almost exclusively of Humvees in some 15 variants. The long-term strategy envisions replacing a significant fraction of the 120,000 Humvees in the fleet with about 49,000 Joint Light Tactical Vehicles (JLTV) at a cost of approximately $39 billion over the next two decades.

The Army’s current plan would leave it operating some 50,000 Humvees across Active and Reserve Components. The fundamental question facing Army leadership is which variants to eliminate and which to maintain? A related question is, how will the Army recapitalize the legacy Humvee fleet in order to ensure its viability over the next several decades?

The current Army approach appears to emphasize expanding the number of armored platforms in its light tactical vehicle fleet. This means acquiring JLTVs and retaining up-armored Humvees and some number of Mine-Resistant Ambush Protected vehicles. The majority of reductions to the Humvee fleet will come from those that are unarmored. This plan parallels upgrades for the vehicles of the Armored Brigade Combat Teams: the Abrams tank, Bradley Fighting Vehicle and Paladin self-propelled howitzer. The Army also is replacing the obsolescent M113 personnel carrier with the new Armored Multi-Purpose Vehicle and providing a lethality upgrade for its Stryker wheeled combat vehicles. Up-armored Humvees will continue to play a role in these formations and in the other types of brigade combat teams.

While there is a rationale for deploying up-armored and protected vehicles for combat units, particularly the Armored Brigade Combat Teams, it is not self-evident that all tactical vehicles at echelons above brigade need to be armored. There are a host of units at higher echelons – combat support, fires, medical, engineering and sustainment – that require mobility but do not require armored protection. Currently, there are around 70,000 unarmored Humvees in the light tactical vehicle fleet. Many of these equip formations behind the front lines or are restricted to the continental United States.

The Army should create a balanced strategy for its light tactical vehicle fleet. Brigade Combat Teams and supporting formations, those units most likely to be deployed into combat, should be equipped with the JLTV and up-armored Humvees. But formations farther to the rear probably could meet their mobility requirements with unarmored Humvees. The transport of people, supplies and non-essential items such as mail and laundry generally do not require protection by an up-armored Humvee, much less a JLTV. The number of ambulance variants of the Humvee could also be increased. The point is that the Army needs to take a careful look at the balance of up-armored and unarmored Humvees in the fleet it plans to retain.

Once a decision has been made regarding the balance between up-armored and unarmored Humvees in the retained fleet, the Army then needs to put in place a recapitalization program for these vehicles. In order to maintain the utility of the Humvee fleet for the next several decades, the Army needs to refurbish these vehicles, provide many of them with more powerful engines, better transmissions and more robust suspension systems. The Army currently recapitalizes around 1,200 Humvees annually at a cost of some $150 million. Doubling this figure to 2,500 vehicles a year for an additional cost of about $150 million a year would put the Humvee fleet on a path to full recapitalization by around 2040 when the current planned procurement of JLTV ends. The overall effect of this plan would be to provide the Army with a modernized light tactical vehicle fleet.