Great Britain’s Time of Troubles: Why it Matters 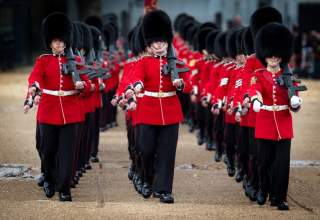 British politics is in a state of flux, with potentially major implications for European unity and transatlantic relations.

Last month, the United Kingdom came close to dissolution as the Scottish electorate toyed with the idea of striking out alone.  Earlier this year, the UK Independence Party (Ukip) beat all three of the major parties in elections to the European Parliament—the first time in over a century that a party other than the Conservatives and Labour had won the popular vote in a UK-wide election.

There were points during the Scottish referendum campaign that it looked as though the 307-year old union between England and Scotland would be terminated.  Many believe that a decisive slice of Scotland’s voters were persuaded to maintain the status quo only on the promise that Scotland’s devolved parliament at Holyrood would be given extra powers.  As such, the ‘No’ campaign’s victory hardly can be interpreted as a vote of confidence in the British system.  Scots demanded constitutional reform.  What is more, politicians from across the political spectrum undertook to respond.

The defeat of Scotland’s bid for independence, then, offered only momentary respite for those invested in maintaining the Union.  A commitment has been made to rush extra powers for Holyrood.  At the same time, however, the demand for heightened devolution (“devo-max”) in Scotland has been matched by cries of unfairness by politicians in England.  Why should Scotland be afforded greater insulation from politicians in London when English matters are still being voted on by Scottish MPs?  Why is England the only country of the United Kingdom to lack its own devolved assembly?  Although English nationalism has not yet reached fever pitch, there is at least a growing appetite for the entire apparatus of the British state—not just its Scottish elements—to be revisited.  An uneven and unequal distribution of power cannot survive in the long-term.

Sub-national constitutional questions are not the only ones plaguing the Conservative-led government in Westminster, however.  Ever since Ukip won the European elections this summer, the question of Britain’s future in the European Union has been placed firmly at the top of the national agenda.  Ukip is virulently anti-European, with withdrawal from the EU comprising the party’s flagship policy.  Ukip’s stubborn popularity, then, is cause for consternation among the largely pro-European Westminster political elite.  Simply put: many ordinary Britons would like to see the back of Brussels.

The Conservative party in particular finds itself squeezed by the rise of Ukip.  Desperate to win a parliamentary majority next year, the Conservatives can ill afford to hemorrhage votes to the nationalistic Ukip on its right flank.  Two Conservative MPs already have defected to Ukip, their resignations prompting high-profile by-elections when the government would much rather project an image of unity, competence and stability.  Earlier this month, Ukip won its first ever elected Member of Parliament as a result of one of these by-elections.  Analysts predict that the insurgent force could gain as many as 30 seats in the House of Commons next year.

Ukip’s electoral success points to another trend that threatens to undermine the stability of British politics—that is, the country’s long suffering two-party system looks to be in potentially terminal decline.  A third party, the Liberal Democrats, has been in government since 2010.  As noted above, Ukip came first in national polls held this summer.  The Scottish National Party has been the largest party in the Scottish Parliament since 2007.  Nationalists also poll strongly in Wales, while Northern Ireland operates its own party system altogether.  Across Britain, Ukip and other parties such as the Greens—whose numbers have swollen of late—threaten to chip away at the Conservatives’ and Labour’s electoral dominance.

All of these developments should be of concern to Britain’s allies in the North Atlantic.  Britain’s future in Europe is the most obvious potential casualty of the political turbulence.  Ukip and Conservative backbenchers are loudly calling for a referendum on the issue.  The pro-European cause is hardly helped by the ineptitude of Eurocrats in Brussels: unbelievably, EU officials have recently ordered London to contribute an extra £1.7bn ($2.72bn) to the mammoth EU budget, punishment for Britain’s economy having out-performed its continental counterparts.  Cameron has vowed to ignore the request; his Eurosceptic critics argue that the government is powerless to resist.  What might otherwise have been an embarrassing political headache has the potential to become a major catalyst in the present context.  Steering Britain through such tempestuous seas will take great foresight and political leadership.

Britain used to be known as Perfidious Albion because of its reputation as an unreliable ally.  The charge then was that Britain only could be relied upon to pursue its own selfish interests, never to act with honor or altruism.  Today, the country might more accurately be described as Precarious Albion—an unreliable ally not because of perfidy but because of its inability to guarantee a future for itself as a strong and united player at the heart of Europe.  Its domestic political system in flux, Britain risks becoming a rickety transatlantic bridge indeed.