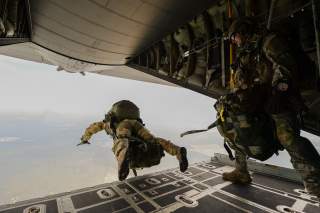 Waltz explained that, while US Special Forces were trained and prepared as combat warriors, much of their work involved training, cultural understanding and psychological efforts to explain the messages of US freedom and humanity.

“Until America is prepared to have its grandchildren stand shoulder-to-shoulder with our grandchildren, we won’t be successful,” -- Mullah Ghafoordai - tribal elder in Eastern Afghanistan

It was a profound and decisive moment – which seemed to reverberate throughout mountain villages in Eastern Afghanistan…… an anti-Taliban Afghan tribal elder told Green Beret Michael Waltz he could no longer cooperate with US Special Forces in the fight against insurgents in his country.

Waltz had spent months having tea with friendly Afghans and tribal leaders in the area and, he reports, made great progress with efforts to collaborate against the Taliban. They shared information, allowed US allied Afghan fighters to be trained by Green Berets and, in many cases, joined US forces in the fight.

The tribal elder’s comments were quite a disappointment for Waltz, who vigorously argues that the fight against the Taliban, terrorists and many insurgent groups around the world – will take 100 years to win.

Waltz recalled that President Obama’s 2009 announcement that the US would be withdrawing from Afghanistan by 2011, engendered new risk and danger for Afghans cooperating with US forces.

Although, in the same speech, Obama announced US troop numbers would increase by thousands in the near term, a declaration of an ultimate withdrawal created a strong impact upon friendly Afghans, Waltz said.

Obama’s announcement, which has been followed by subsequent efforts to further draw-down the US presence, changed the equation on the ground in Afghanistan, compromising the long-standing cooperation between the friendly Afghan tribal elder and Waltz’s team of Green Berets in fight against the Taliban, Waltz argued.

“It is going to take multiple generations of winning hearts and minds,” Waltz recalled, explaining his frustration and disappointment upon seeing a long-standing collaborative partnership collapse amid fear of Taliban retribution.

Although much has happened regarding permutation of the US-Afghan strategy since that time, and specifics of Obama’s intended withdrawal date subsequently changed, there has been an overall systematic reduction of US troops in recent years.

During July 6, 2016 U.S. President Obama said he would draw down troops to 8,400 by the end of his administration in December 2016; this approach greatly increased pressure on US Special Forces, relying even more intensely upon their role as trainers and advisors.

Green Berets had already been among the most-deployed US military units, often deploying as many as 10-times throughout the course of their career.

“Green Berets don’t easily ask for help and do not easily identify themselves as having an issue, but it is OK to say you have a problem. The Green Beret Foundation understands the mindset of “America’s Quiet Professionals”, and because of this, we are in a good position to help identify needs and render assistance,” Ret. Maj. Gen. David Morris, Chairman of the Board of the Green Beret Foundation, told Scout Warrior.

While there have been many who both supported and opposed Obama’s Afghanistan strategy, sparking years of ongoing debate, Waltz maintains that impact of the 2009 announcement upon the US Special Forces’ effort in Afghanistan brought lasting implications and spoke to a larger issue regarding US-Afghan policy.

“We are in a war of ideas and we are fighting an ideology. It is easy to bomb a tank, but incredibly difficult to bomb an idea. We need a long-term strategy that discredits the ideology of Islamic extremism,” Waltz added. “We are in a multi-decade war and we are only 15-years in.”

Waltz explained that, while US Special Forces were trained and prepared as combat warriors, much of their work involved training, cultural understanding and psychological efforts to explain the messages of US freedom and humanity.

“This was kind of the premise behind George W. Bush’s freedom agenda. These ideologies have narratives that specifically target disaffected young men who see no future for themselves or their families,” Waltz explained.

Some of the many nuances behind this approached were, quite naturally, woven into a broader, long-term vision for the country including the education of girls and economic initiatives aimed at cultivating mechanisms for sustainable Afghan prosperity.

The reality of a multi-faceted, broadly oriented counterinsurgency strategy in Afghanistan is the premise of Waltz’s book - “Warrior Diplomat,” which seeks to delineate key aspects of his time as a Green Beret.

The book chronicles this effort to attack Taliban fighters with so-called “kinetic” or intense combat techniques – alongside an equally intense commensurate effort to launch an entirely different type of attack.

Diplomatic or “non-kinetic” elements of the war effort involved what could be referred to as war-zone diplomacy, making friends with anti-Taliban fighters, learning and respecting Afghan culture, and teaching them how to succeed in combat.

“While Green Berets perform direct combat missions, their core mission as the only Unconventional Warfare unit in the US inventory,  is to train, coach, teach and mentor others. A 12-man A-Team can train a force of 1,000 - 2,000 fighters and bring them up to an acceptable measure of combat readiness.  If you stop and think about it, that is 1,000 to 2,000 of our sons and daughters who do not have to go to war because of this training,” Morris said.

Addressing the issue of cultural sophistication, Morris explained how Green Berets are required to demonstrate proficiency in at least one foreign language.

Citing the Taliban, ISIS and historic insurgent groups such as Peru’s Shining Path – and even the decades-long Cold War effort to discredit communism, Waltz emphasizes that the need for a trans-generational, wide-ranging approach of this kind is by no means unprecedented.