Is H. R. McMaster Stuck in the 'War on Terror' Time Warp? 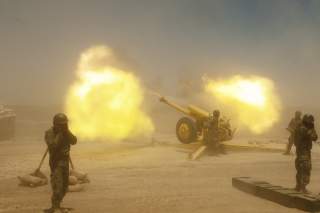 A recent flare-up of violence in Afghanistan reminded America of its forgotten war, as the U.S. dropped a massive“Mother of All Bombs” bomb on the Islamic State, three U.S. Special Forces soldiers were tragically killed, and more than 140 Afghan soldiers were massacred by Taliban suicide attackers. Sixteen years after 9/11 and Al Qaeda is back with bigger training camps than ever before, the Islamic State is attempting to establish a foothold, and the Taliban are on the march to Kabul. Pakistan still supports militants and provides safe havens, and a revanchist Russia is likely assisting the Taliban. Resolute Support Commander General Nicholson calls the war a “stalemate,” and the U.S. Marines are back in Helmand to “train, advise and assist” the beleaguered Afghan forces who are dying at an alarming rate. The Afghan National Unity Government conjured up by Secretary of State John Kerry seems neither national nor unified, but corrupt and ethnically divided, and always appears on the brink of collapse. Even the return of fugitive warlord Gulbuddin Hekmatyar to Kabul in a peace accord is a double-edged sword for the shaky government.

Against this grim backdrop, the Trump administration is reviewing its Afghanistan strategy. President Trump himself is reportedly undecided on which course to take, with his senior strategist Steve Bannon convinced National Security Advisor H. R. McMaster’s plans for Afghanistan are the kind of “nation building” Trump campaigned against. Meanwhile, the Pentagon is reportedly considering sending up to fifty thousand extra troops to Afghanistan. The McMaster faction could be drawing on the authors I discuss below to make their case to President Trump. Instead of a focus on U.S. troop levels, they emphasize the necessity of a long-term presence and a regional peace deal with the Taliban. Leverage in peace negotiations requires assisting the Afghan forces to achieve battlefield successes. The art of this deal involves doubling down on the art of war.

Why Are We Still There?

A U.S. withdrawal would cause the Taliban to advance on Kabul, allowing Al Qaeda, the Islamic State and other extremist groups to increase their presence in Afghanistan, which would threaten the United States, according to Seth Jones of the RAND Corporation. This could fan the flames of a regional proxy conflict involving nuclear powers, as Pakistan, India, Iran, Russia and China step in the gap left by the United States. Jones also emphasizes the credibility argument: a U.S. withdrawal would undermine global alliances against Islamic extremism, and bolster the jihadist narrative. Instead of focusing on troop levels, the United States should establish a small but durable military and diplomatic presence. It should set limited objectives: prevent the Taliban from overthrowing the government, pursue reconciliation with those Taliban factions willing to negotiate, and target terrorist groups like Al Qaeda and Islamic State that threaten the United States. Jones describes Afghanistan as an important regional base in the global campaign against Islamic extremists, with Afghan leaders and a population that actually want the United States to stay—a rarity in the region.

Chris Kolenda of the Center for a New American Security describes the flawed assumptions of the Obama strategy: that the Afghan government can win the battle of legitimacy in contested or Taliban-held areas; that Pakistan will compel the Taliban to negotiate; that the Afghan Taliban have little support in the country and a troop drawdown will make them more likely to negotiate; and that the Afghan government will compromise to achieve peace. None of these assumptions are true. Kolenda warns against an open-ended U.S. commitment without conditionality, which would “trap the United States into bankrolling a kleptocratic and dysfunctional government fighting a never-ending war.” However, he writes that advancing far enough in a peace process to see serious conflict-ending negotiations could take a decade or more, and he puts an “enduring commitment” to stabilize the battlefield as the first requirement of any successful outcome.

To prevent getting locked into a never-ending war, the United States should rely on “sometimes painful” incentives to compel the Afghan government and security apparatus to reform, take a regional approach and pursue a peace process. “Graduated penalties” should also be utilized against states like Pakistan that enable the Taliban. Kolenda calls for decentralizing U.S. decisionmaking to a civil-military command in theater, and suggests that General Nicholson, the current Resolute Support commander, be put in charge of the full range of American efforts in Afghanistan. Finally, to advance the peace process, a third-party “peace custodian” or intermediary who is viewed as credible by the Afghan government and Taliban should be appointed.

Dealing with the Taliban

Professor Barnett Rubin of New York University, former senior advisor to the U.S. Special Representative for Afghanistan and Pakistan, laid out in a wide-ranging piece a new regional approach to peace. In it, he noted that the biggest obstacle to starting talks with the Taliban is not the principle of talks itself, but the framework for talks. The Taliban do not recognize the Afghan government, and want to negotiate directly with the United States. Meanwhile, U.S. strategic thinking about the region is caught in an outdated “war on terror” time warp, causing the United States to pursue bilateral policies with countries in the region. However, the geopolitical situation has changed dramatically since 2001. China and India in particular have grown tremendously, and Pakistan is now a central piece of China’s strategy through the China-Pakistan Economic Corridor (CPEC).

Russia recently convened talks that included China, Pakistan, India, Iran, Afghanistan and the Central Asian states—an attempt to fix problems with an earlier regional initiative called the Quadrilateral Coordination Group, which involved the United States, China, Afghanistan and Pakistan. The United States declined to attend, but such a regional approach is vital for serious peace talks, Rubin argues, calling it “a starting point worth testing.” The United States could help shape regional arrangements “that would do more to stabilize Afghanistan and stop terrorism than a thousand drone strikes.” For example, cooperating with China to restart peace negotiations and connect Afghanistan to the China-Pakistan Economic Corridor might also get Pakistan to cooperate on safe havens.

A major difficulty in a peace deal will be to differentiate between the Afghan Taliban and international groups like Al Qaeda, who have a strong relationship, Bill Roggio of The Long War Journal points out. Al Qaeda leader Ayman al-Zawahiri is likely living in Pakistan with full knowledge of the Pakistani Inter-Service Intelligence, and in 2015 renewed Al Qaeda’s oath of allegiance to the Taliban’s emir. However, former U.S. Special Representative for Afghanistan and Pakistan James Dobbins of the RAND Corporation and former Senior Advisor to ISAF Carter Malkasian in 2015 noted that plenty of Taliban leaders have denied any desire for international jihad. And in 2009, the Quetta Shura announced that the Taliban would not seek to attack other countries if foreign forces left Afghanistan, nor would they let terrorist groups use Afghanistan as a base. The Taliban would, however, seek to get rid of the current Afghan constitution, which was composed by the United States, and it would have all foreign troops leave Afghanistan. And even when U.S. troops have departed, the United States would have to remain committed to a strategic partnership with Afghanistan and continue to provide military aid, or the peace could unravel, Dobbins and Malkasian write.

Michael Kugelman of the Woodrow Wilson International Center for Scholars has noted that the sustained alliance between the Taliban and Al Qaeda isn’t just a threat to Kabul, but also to U.S. interests beyond Afghanistan. While the Afghan war can’t be “won militarily,” Kugelman stresses that Washington, DC needs maintain a laser-like focus on depriving Al Qaeda of new Taliban-shielded sanctuaries. Former U.S. Special Representative for Afghanistan and Pakistan Richard Olson noted during a speaking engagement at the Stimson Center that the Taliban might be prepared to abandon its relationship with Al Qaeda in return for “some respectability.” He argued that in view of the emergence of Islamic State, the Taliban might eventually accept some residual U.S. military presence (the Taliban and Islamic State have been clashing on the battlefield). Olson is convinced Pakistan will never abandon the Taliban, regardless of U.S. pressure, since the Pakistani establishment uses its Afghanistan policy for geostrategic maneuvering against what it perceives as an existential threat—India. Like Kolenda and Jones, Olson emphasized that the Taliban would only negotiate if it believes it is unlikely to win on the battlefield. Therefore, successful negotiations require that the U.S. “harden” the Afghan state and, ironically, pursues “a long-war strategy.”

Getting Tough on Pakistan

All authors stress Pakistan’s controversial role in the conflict. President Trump recently appointed Heritage Foundation’s Lisa Curtis, who has strong views on Pakistan, as NSC director for South and Central Asia. In a paper with former Ambassador of Pakistan to the United States Hussain Haqqani, Curtis argues for a more muscular approach that no longer views Pakistan as an “ally” and is willing to impose real costs. The authors note that a firmer U.S. commitment to Afghanistan is critical to motivating Pakistan to reassess its support to the Taliban and its allies. They emphasize a regional diplomatic approach involving China and the Gulf States, who share U.S. concerns about Pakistani tolerance of and support to terrorist groups.