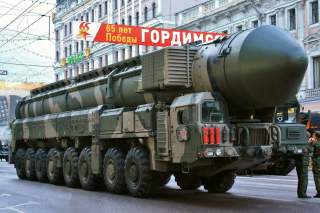 According to the Russian Ministry of Defense, the launch was designed "to test an advanced combat payload" which is designed to “overcome missile defenses.” The data gathered from the experiment will be used to develop future Russian ballistic missiles technology to counter missile defenses.

It is unclear what kind of system the Russians were testing.

“It’s some type of new warhead, but no new details available,” Vasily Kashin, a senior fellow at the Center for Comprehensive European and International Studies at Moscow’s Higher School of Economics told The National Interest.

“They have a stated goal to overcome any missile defenses which can be possibly created in the foreseeable future.”

Pavel Podvig, director of the Russian Nuclear Forces Project, told The National Interest that there is not enough data to say for sure what the Russians are up to, but he does not believe that they are testing a maneuvering reentry vehicle (MaRV).

“I don't think we know enough to say what that Topol test was about,” Podvig said.

“I would doubt it was a MaRV test. More likely it was a test of decoys and other penetration aids. It is more difficult to say what was the earlier Yars launch. Probably not decoys - Kura doesn't have radars that would allow evaluating their effectiveness. But the MoD said these were experimental warheads.”

Former Soviet nuclear negotiator Nikolai Sokov, now a senior fellow at the James Martin Center for Nonproliferation Studies, Middlebury Institute of International Studies at Monterey told The National Interest that while there are no details, it is possible it could have been a MaRV.

“Yes, that launch looked like one. I would not say, however, it was an ‘attempt.’ Work has been progressing for quite some time now with the first test of the maneuvering warhead conducted in 2004,” Sokov said.

“Very briefly and to the best of my knowledge: the program was launched in mid-1980s as part of response to Star Wars, reached prototype stage by 1990-91, then shelved, then resurrected in 1997 or 1998—I had a chat about it in Russia in 1998—first live test apparently in 2004, the Soviet prototype was redesigned very considerably, it seems.”

The reason Sokov suspects that it was MaRV is because the test launch fits a certain profile of Russian and Soviet test launches.

“Tests from Kap Yar to Sary Shagan are typical to test defense penetration because the latter has always been a missile defense-related site and has all the necessary equipment, “ Sokov said.

“Normally, launches are conducted with missiles having designation ‘E’ at the end—a special modification for testing payload and having in mind the relatively short distance between the two ranges. The warhead is intended, I believe, for Yars—it was originally intended for the missile that later became known as Topol-M and Yars is a further development of that. I’ve seen reports of it being tested on Topol, Topol-M, and Yars. I would not be surprised, however, to see it in the future on the heavy liquid ICBM that is still under development.”

The earlier test Podvig was referring to was a silo-based Yars launch on September 12. That earlier test was notable because the Russians stated that the missile was fitted with “experimental” warheads.

“The main purpose of the launch was to reaffirm the reliability of a batch of the same class missiles,” the Russian Defense Ministry told the TASS news agency.

“The experimental warheads reached the designated area at the Kura proving ground in the Kamchatka Peninsula. The targets were met and tasks accomplished in full."

It is not clear what these new “experimental” Russian reentry vehicles (RV) are.

“We don't know what they are. One thing is certain - these are not ‘hypersonic deeply maneuverable vehicles,’” Podvig wrote.

“On the other hand, if these were just ‘conventional’ RVs of a new type, their experimental nature wouldn't have been mentioned. So, it is a puzzle for now. Of course, the defense industry has many things in its sleeve - a MaRV, for example (this one was developed by the Makeev Design Bureau, so I doubt it would be tested on Yars).”

It is not surprising that Russia is experimenting with new types of RVs. The Kremlin considers its strategic nuclear deterrent as the paramount guarantor of its sovereignty.

With the United States working on advances missiles defenses, Moscow has stepped up its efforts to counter any perceived threat to its strategic nuclear forces—the one area where Russia maintains parity with Washington.