Here Is the U.S. Navy's Plan to Assess Its Most Recent Ship Collision 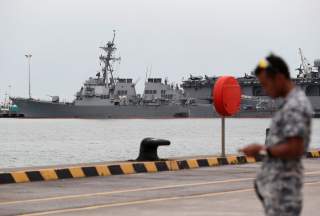 The U.S. Navy expects to use a large salvage vessel to transport USS John S. McCain (DDG 56) to Japan for a detailed damage assessment.

The Arleigh Burke-class Aegis missile destroyer was severely damaged during a collision with a merchant ship called Alnic MC in the Straits of Malacca on August 21. The accident took the lives of ten sailors.

“The Navy intends to issue a task order on an existing contract, for the salvage patching and transport via heavy lift of USS John S. McCain from Changi Naval Base in Singapore to the U.S. Navy's Ship Repair Facility-Japan Regional Maintenance Center in Yokosuka, Japan,” reads a statement from Naval Sea Systems Command.

“The lift is notionally planned for late September.”

NAVSEA will move the stricken vessel to Yokosuka, Japan, to assess the damage to the ship. It is possible that the destroyer will have to be moved back to the United States to complete repairs.

“The Navy is moving USS John S. McCain (DDG 56) to Yokosuka to allow the crew to be close to their families and to allow for a complete assessment of the damage,” NAVSEA states. “Completion of the damage assessment is required to fully determine repair plans to include cost, schedule and location for the ship's repairs.”

As the NAVSEA statement notes, the ship suffered significant damage to her port—or left—side during the collision. “The guided-missile destroyer USS John S. McCain was involved in a collision with the merchant vessel Alnic MC while underway east of the Straits of Malacca and Singapore on Aug. 21,” NAVSEA states. “The ship suffered significant damage to her port side aft resulting in flooding to nearby compartments, including berthing, machinery, and communications rooms.”

Last month, the U.S. Navy awarded a Houston-based company called Patriot Shipping to move USS Fitzgerald (DDG-62) to Pascagoula, Mississippi, from Yokosuka, Japan, for repairs. Huntington Ingalls Industries will repair Fitzgerald at its shipyard in Pascagoula. The navy will likely have to make similar arrangements for USS John S. McCain once the damage to the ship has been fully assessed.

The USS Fitzgerald and the USS John S. McCain collisions are just two in a spate of accidents involving U.S. Navy warships. The service’s fleet has been increasingly stress by the deployment schedule and often crews are forced to try to catch up on training at sea. Ultimately, the navy will likely have to cut back on its operations tempo or growth the fleet, but the status quo is not acceptable.