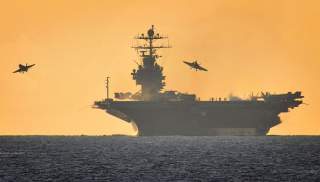 The United States Navy will have to live with the proliferation of anti-ship ballistic missiles that have the potential to threaten an aircraft carrier. However, the threat from such weapons is not insurmountable, and in many cases, the danger might be overblown.

“I think there is this long-range precision strike capability, certainly. Everybody says A2/AD [anti-access/area-denial],” Adm. John Richardson, the U.S. Navy’s chief of naval operations, told an audience at the Center for a New American Security’s annual conference on June 20. “A2/AD is sort of an aspiration. In actual execution it’s much more difficult.”

While U.S. Navy officials—and many Washington, D.C., think tanks—have talked about the potential threat to the service’s aircraft carrier fleet from weapons such as the Chinese DF-21D and DF-26, the difficulty of developing a true A2/AD capability is seldom discussed.

As Richardson pointed out, A2/AD strategies have existed since the dawn of warfare. What makes the new Chinese capability different is the combination of intelligence, surveillance and reconnaissance (ISR) capability with long-range precision weapons. “The combination ubiquitous ISR, long-range precision strike weapons take that to the next level,” Richardson said. “It demands a response.”

“I think that the proliferation of anti-ship ballistic missiles is just a fact of life we’re going to have to address,” Richardson said. “That fact that it’s in the hands of North Korea—a leader who has been less predictable than many others brings another dimension to that equation.”

However, that does not mean that the aircraft carrier is obsolete or that the carrier air wing is unable to conduct its mission. As Navy officials have mentioned repeatedly in private conversations—weapons such as anti-ship ballistic missiles require an extensive “kill chain”—including ISR sensors, data-networks, command and control and other systems—in order to be effective. That extensive kill chain can be attacked and disrupted through electronic attacks, cyber warfare or some other kinetic means. “Our response would be to inject a lot of friction into that system,” Richardson said—disrupting the enemy kill chain.

Indeed, when A2/AD zones are discussed, often the entire radius of where an enemy missile can attack targets—such as an aircraft carrier out at sea—is marked as a no go zone. But in the Navy’s view, it can operate inside those zones, but the service would have to use different tactics. Moreover, the assumption that an area defended by a weapon such as a DF-26 is a no-go zone makes the implicit assumption that the Chinese—or other enemy—has the ISR assets and networks to make their weapon work perfectly. “That’s just not the reality of the situation,” Richardson said.

Nonetheless, anti-ship ballistic missiles and China’s growing A2/AD capabilities will remain a potential threat. But that threat is not insurmountable and will not render America’s mighty super carriers or their air wings obsolete in the near future.