Here Is Why the U.S. Navy's Littoral Combat Ships Punch below Their Weight 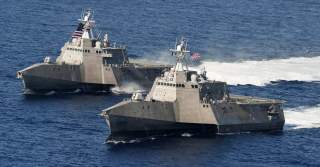 Proponents of the little ships are optimistic the platform is flexible enough to adapt currently missing capabilities in long-range missiles or mine-warfare capability. Harpoon missiles were tested on an LCS in July 2017, for example, and the Naval Strike Missile and Long-Range Anti-Ship Missiles are also to be evaluated. Eventually, and at great cost, all the bits of tech may fall into place for the LCS to perform as expected. However, the Navy is apparently looking ahead to develop tougher and more heavily armed frigates in its FFG(X) program, to succeed boats conceived in a very different threat environment.