Here's Why the U.S. Navy Could Add 'Light' Aircraft Carriers to the Fleet 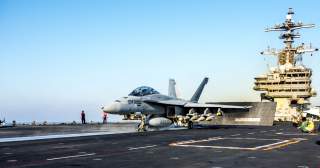 The U.S. Senate Armed Service Committee (SASC) is inserting language in its markup of the fiscal year 2018 National Defense Authorization Act (NDAA) that would mandate that the U.S. Navy study a preliminary design for a new light carrier.

The new ships would not replace the Gerald R. Ford-class (CVN-78) supercarriers, but rather if the new ships were built, they would be used to disperse naval aviation assets across a larger geographical area to help support amphibious ready groups and the like.

“Authorizes $30 million for preliminary design of a smaller aircraft carrier, which is in addition to the administration's request,” reads the summary of the SASC version of NDAA.

Senate aides told reporters during a background brief on June 29 that the reason they inserted the language was because they are seeking information on different carrier types. Several naval force structure studies commissioned by the Navy have shown that there is a need for a light carrier to complement the service’s massive nuclear-powered supercarriers.

“This is something we have continually heard,” a senior SASC aide told reporters.

“The thought here is to put some money into some kind of detailed design work…showing us more specifically what if any merit there is as to how a program like this could come together.”

Another Senate aide with specific expertise in naval aviation and naval platforms said that all three naval force structure studies have called for the addition of a smaller carrier to the fleet.

There is also a RAND Corporation study that calls for such a vessel, the aide said, however that report is classified. The Senate is trying to have the RAND study declassified and released publicly.

The Senate aide said that the studies have indicated that a light carrier in the 60,000-ton to 70,000-ton range—roughly the size of an old Forrestal-class or Kitty Hawk-class aircraft carrier—would be the “sweet spot” for such a ship. The ship would also likely only need two catapult launch systems because it would not need to generate the same number of sorties as a full-sized carrier.

“It would also provide options for contingency operations,” the aide said.

The reason the Senate wants to mandate a preliminary design for the new light carrier is because a simple design concept does not provide enough insight into the cost or schedule that the new ships might need.

“A preliminary design is appropriate to take the next step,” the aide said.

If the Navy does proceed with the new light carrier, those vessels would be in addition to the Ford-class—as the smaller vessels are no substitute for the larger supercarriers. There are some factions within the U.S. Navy that are adamantly opposed to even studying a smaller carrier in event that someone questions the need for a minimum of 12 full-sized supercarriers.

The Senate staffers are clear that the proposed new ships are not intended to challenge the primacy of the Ford-class. Indeed, the Senate bill speeds up the procurement of the CVN-78-class to every four years rather than every five years.