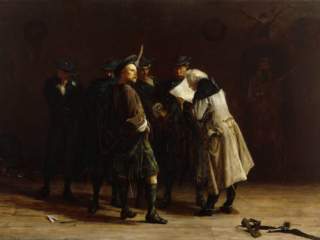 “I soon came to know in the weary debates and the 104 divisions against the European Communities Bill who it was with whom I shared feelings of anger, outrage and hatred at what was being perpetrated. I am aware that the ‘Left’ is supposed to be motivated only by the desire to be unimpeded by ‘Europe’ in converting Britain into a socialist state; but I am compelled to depose that the instincts and reasoning of the ‘Left’ opponents of membership . . . were exactly as nationalistic, not to say patriotic, as my own . . . [I part company with Labour only] because of my blind, high Tory ultimate faith in the people. If they are the people I thought and still want to think that they are, those who represent them will assuredly be pulled back in time from the betrayal of their birthright of parliamentary freedom either to a European state or to a Marxist bureaucracy.”

In light of Britain’s upcoming EU referendum, and President Obama’s public opposition to Brexit, the above Enoch Powell quote is well-suited to these troubled times. At stake are the integrity and sovereignty of what journalist Peter Hitchens termed “one of the happiest, fairest and kindest societies which has ever existed in this imperfect world.”

For me, as a strong Anglophile, the answer is clear: it is in the tradition of communitarian civic conservatism—High Toryism. In 1931 T. S. Eliot wrote in The Criterion, “The only hope [for Britain] is a Toryism which, though not necessarily distinct for parliamentary purposes, should refuse to identify itself philosophically with that ‘Conservatism’ which has been overrun first by deserters from Whiggism and later by businessmen.”

Indeed, there is an urgent need to restore radical and progressive Toryism, one founded on Edmund Burke’s concept of little platoons of family and civic associations as “the first link in the series by which we proceed towards a love to our country, and to mankind.”

Eliot, to whom Professor Roger Scruton devoted the final chapter of his A Political Philosophy: Arguments for Conservatism, summed it up in the following words: “You cannot expect continuity and coherence, you cannot expect reliable behaviour on fixed principles through changed situations, unless there is an underlying political philosophy not of a party, but of the nation,” as we currently face the compelling need to “bring freedom downstairs to the people and restore authority at the top” The French conservative thinker, Charles Maurras, advocates this very idea.

We should have no doubt that the European project is the finest legacy of liberal modernity. It champions state authoritarianism and atomised individualism, derives from the eighteenth-century critique of absolute monarchies and aims to create a civilization that opposes the traditional understanding of family, ethnicity, society and nation as a whole.

It is the concept based on the false ideas of supremacy of wisdom and the ultimate struggle for humanity’s triumph, ideas that pushed us into the era of progress. The blind belief that economic development and the application of science and technology form the only way to secure our social wellbeing could have only gained ground in the European mind through a radical redefinition. Knowledge is now a commodity. This commodity, as French poet Paul Valéry noted in The Crisis of the Mind, is “to be turned out in more and more manageable or consumable forms . . .  to be distributed to a more and more numerous clientele . . . to become an article of commerce” accessible easily by “Everybody.”

These “new European men” have been ardently working in order to transcend traditional culture, forgetting that it “has for us a very ancient connection with the idea of Europe.”

In turn, this “diffusion of culture” first appeared as “a drop of wine falling into water barely colouring it,” but currently “sometime after it has vanished, gone back to limpidity, we should see, here and there in our glass—which seemed once more to hold pure water—drops of wine forming, dark and pure.”

The Tower of Babel became an ultimate goal for the modern European mind, being perceived as the only way to guarantee peace and prevent future wars in Europe, where individual states, by surrendering national sovereignty to supranational European institutions, will enjoy everlasting happiness and prosperity—forgetting Paul Valéry’s warning that if “the state is weak, we perish.”

And only when this devilish genius of European psyche, characterised by “a driving thirst, an ardent and disinterested curiosity, a happy mixture of imagination and rigorous logic, a certain unpessimistic skepticism, an unresigned mysticism,” has recently realized that his “creativity” is seriously harming the whole body by sacrificing its fate on the altar of political correctness—with the cradle of democracy on her knees, France a hostage to melioristic liberalism, and the echos of the past disparity between the East and the West expressed in the plans to cancel the Schengen agreement in the light of the most recent refugee crisis—consciousness of the “Hamlet of Europe” reminded itself he is eternally trapped “between the passage from war to peace, and the passage from peace to war.”

War, which can be prevented if we understand that “the prophet is in the same boat as the historian,” where the conclusion that should be drawn from the lesson of history is that all these attempts to unify Europe failed to bring lasting unity or peace to a war-torn continent. Having in mind that in fact, one reason for Europe’s blood-stained past is the recurring struggle to establish a single empire, which was confirmed by the last great British Prime Minister, “the Mother of Tories”—Baroness Margaret Thatcher: “What we should grasp, however, from the lessons of European history is that, first, there is nothing necessarily benevolent about programmes of European integration; second, the desire to achieve grand utopian plans often poses a grave threat to freedom; and third, European unity has been tried before, and the outcome was far from happy.”

Therefore, I would agree with Professor Ron Dart of the University College of Fraser Valley in Abbotsford that “we live in an age dominated by liberalism,” where the sort of matrix seems to be a natural state of affairs into which we are born, and surprisingly, it is always accompanied by furious unwillingness to question liberalism’s own fundamental principles. It is like suicidal shift away from memory and the past to a “preoccupation with the present and immediate,” which Dart accurately characterized as a turning away from humilitas to hubris.

Sadly, in Britain, the intellectual descendants of the Whigs who stood for insubordination and innovation currently make choices that may, as Burke already warned, cast the whole nation “into the antagonist world of madness, discord, vice, confusion, and unavailing sorrow,” because according to Walter Scott: “The Whigs will live and die in the heresy that the world is governed by little tracts and pamphlets,” constantly imposed on Albion from Brussels.

So in my opinion, to counter this narrative, the British people should look to their own heritage and traditions—their monarchy, their church and their history—to prevent Britain's view of itself drift from self-confidence to self-denigration.

I believe they need to preserve the institutions and mores that came to define the essence of Britishness over the centuries, from religious faith to sexual probity to the self-image of a nation that had fought valiantly in the name of freedom against Nazism. They have to preserve the Crown and Parliament as the governing institutions in the overall traditional order to prevent what­ Hitchens called: “the burial of a great and civilized nation.”

Therefore, following Shakespeare’s wisdom evoked in the King Richard the Second play, I would like to encourage natives to “this royal throne of kings” to act “against the envy of less happier lands,” by recalling Alfred Austin’s poem Why England is Conservative, and urge them “to be fair proud” as this is the only way for them to prevent the abolition of their Great country.

Adriel Kasonta is an editorial board member at the Central European Journal of International and Security Studies, a researcher on the Europe Desk at Wikistrat and co-editor of Konserwatyzm.pl. Kasonta is also a member of the Conservative Party (UK), and former chairman of the International Affairs Committee at the oldest conservative think tank in the United Kingdom, The Bow Group. He is the author of the Bruges Group’s research paper titled "British Euroscepticism."