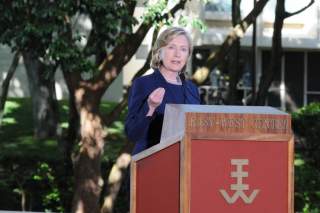 On Sunday, Hillary Clinton took to Twitter to announce that she’s in the race to become president of the United States in 2016. In her time as Secretary of State from 2008 to 2013, Clinton amassed a heft of international experience and focused a sizable chunk of her efforts on the Asia–Pacific.

Indeed, her long-read for Foreign Policy in 2011 set out a vision for the United States in the region that has come to be known as the rebalance (née pivot).

But that was then and this is now. Should Clinton succeed in wrangling the Democratic Party nomination and blaze a trail to the Oval Office, she’ll face an international environment that’s familiar in thematic terms only. The international stage will come with a set of strategic challenges more acute than they are both today and when she left the Obama administration just over two years ago.

2016 isn’t that far away; the strategic rivalry between the United States and China will be a defining feature of the Asia–Pacific just as much then as it is now. Some in the Asia–Pacific claim that the rebalance ran out of steam as both Clinton and Kurt Campbell finished up at State and Middle East policy took center stage under John Kerry. Indeed, the rebalance has struggled to keep the attention of many in Washington, DC as the United States has juggled a host of issues including Russian chauvinism, instability in the Middle East, the Iran nuclear agreement, the Ebola virus, and prioritizing the needs of a war-weary populace still feeling the effects of a global economic downturn.

As a consequence, the Asia–Pacific has made do with less American attention in recent years. While it isn’t desirable or practical to perpetuate this state of affairs, we can expect Clinton to quickly muck in to the region’s challenges in an effort to shore up U.S. primacy and reinvigorate the pivot policy she once led.

As images published last week by CSIS’ Asia Maritime Transparency Initiative show, China’s land reclamation activities in the South China Sea are extraordinary. They should sound the alarm inside the beltway, just as they no doubt do in many Asian capitals.

While all eyes have been on Iran, the heavy lifting of admonishing China’s behavior has been left to newly-installed Defense Secretary Ash Carter. Last Friday, the Secretary told CNN he held grave concerns about China’s apparent militarization of the South China Sea. Carter’s comments follow those of a number of Pentagon figures like incoming Pacific Command chief Admiral Harry B. Harris who, during a recent speech to an ASPI dinner in Canberra, took China to task for its efforts to build “a great wall of sand.” But if U.S. policy in this area is to be effective, the defense/military arm can only do so much; the State Department will need to be more actively, consistently and holistically engaged.

Clinton’s first trip as Secretary of State in February 2009 was to Asia; she visited Japan, Indonesia, South Korea and, finally, China. Later she forged an image as a strong supporter of democracy activist, Aung San Suu Kyi. A Rodham Clinton presidency would drive Asia policy from the top, boosting diplomacy and engagement with states, particularly those in the southeast, likely beneficiaries. Where in some senses Kerry turned away from Asia, a female President Clinton will turn to face it once more. It’s a crucial reorientation.

China’s growing military might and assertive territorial adventurism have many in the region and beyond concerned about what’s to come. If recent experience is anything to go by, China looks set to continue on this path. At State, Secretary Clinton encouraged regional states, including the Philippines during the Scarborough Shoal standoff in 2012, to work “collaboratively” toward the resolution of disputes. As president, Clinton would walk the tightrope as she seeks to reassure allies and maintain good relations with China. Sending the right strategic signals to China that ASEAN states have influential, but not aggressive, friends will be key. While suggestions of an ASEAN maritime patrol force might be many years away, Clinton could throw her energy behind ASEAN-led efforts to conclude a Code of Conduct, as she did during the East Asia Summit in November 2012.

While a U.S. leader can schedule occasional visits to the Asia–Pacific, the White House will always be at 1600 Penn and so enhancing America’s ties with regional allies and partners for the purpose of burden-sharing will be a key and ongoing project for a Rodham Clinton administration. President Obama is well aware of this, having pursued materially deeper and closer defense ties with Japan, and recently working to cultivate a symbolically-significant closeness with India. Clinton would likely continue to see Australia as a core partner in efforts to preserve American primacy in the region, having previously characterized the relationship as “among the strongest of any two countries in the world.” She reckoned that strong U.S.–Australia relations could help to “foster strong healthy relations with China.” Clinton has also warned Australia on the perils of depending on Chinese trade relations, fearing that it “makes you dependent, to an extent that can undermine your freedom of movement and your sovereignty, economic and political.”

Understandably, Hillary Clinton’s campaign will be built around domestic issues like helping working families and clean energy. But it’s worth considering how foreign and strategic policy might play out should the oath of office be taken and a Madam President arrive. A rebooted pivot policy would likely be on the cards, a grand strategy initiative that, led by Hillary Clinton, will likely be closer to its original design.