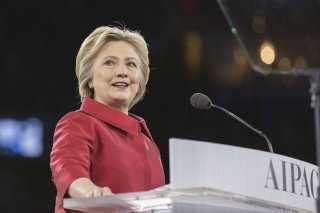 When Hillary Clinton’s top foreign-policy adviser, Jake Sullivan, recently outlined the candidate’s vision for America’s role in the Middle East, he proposed a twofold approach to the proxy war between Saudi Arabia and Iran: “Raising the costs on Iran for its destabilizing behavior and raising the confidence of our Sunni partners that the United States is going to be there and in so doing try and draw down some of their more dangerous hedging behavior.” Time and again Secretary Clinton has struck a distinctive muscular foreign policy vis-à-vis Iran. Her hawkish policies are part of a “broader strategy to confront Iran’s aggression across the region,” as she discussed during her speech to AIPAC. Far from projecting American strength and advancing American interests, this proposed policy is likely to undermine them.

Secretary Clinton, who served as President Obama’s secretary of state from 2009 to 2013, claims the mantle of the president’s foreign policy legacy, a centerpiece of which is the nuclear deal with Iran. Despite its narrow focus, the deal was not a one-off negotiation. It has opened the door for more extensive discussions on various American national security concerns, including Iraq, Syria and the fight against the ISIS.

In fact, Secretary of State John Kerry recently noted that Tehran has been “helpful” against the group. Secretary Kerry and Iran’s foreign minister, Javad Zarif, are now in regular contact. In January, Iran detained American sailors whose ships ventured into its territorial waters. After a flurry of phone calls between Secretary Kerry and Mr. Zarif, they were released unharmed within fifteen hours. This would have been unimaginable a few years ago.

If Secretary Clinton, returns to the old paradigm of isolating Iran, she will undo this progress. Unlike President Obama, it seems Secretary Clinton is driven by what has become the accepted narrative in Washington circles: more sanctions are better because they force Iran to the negotiating table. Since the Iran deal was signed one year ago, Secretary Clinton has consistently argued for more sanctions on Tehran for its missile program and increased pressure for its regional policies.

What this narrative omits is that history shows that the only effective policy vis-à-vis Iran is to address core American concerns while acknowledging Iran’s regional anxieties. Such an approach takes into consideration concerns of allies, including the Sunni Arab states, without putting them ahead of American interests. For instance, Iran believes that Saudi Arabia and its export of Salafist and Wahhabi ideology is the primary driver of instability in the region. From Tehran’s perspective, Al Qaeda, Jabhat al-Nusra and ISIS spring from Riyadh’s petrodollars at their core.

President Obama has recognized the areas in which the United States’ interests align with the Gulf Arab countries, and where they don’t. Today, the Gulf Arabs share Washington’s goal to check Tehran. But they don’t share the interest to effectively degrade and destroy the Islamic State and combat other jihadist groups, which threaten the U.S. homeland and U.S. allies in Europe. Secretary Clinton acknowledged as much after the Orlando shooting at the Pulse nightclub, when she called “Saudis, Qataris, Kuwaitis and others to stop their citizens from funding extremist organizations. And they should stop supporting radical schools and mosques around the world that have set too many young people on the path toward extremism.” President Obama has had to walk a delicate tightrope to create the diplomatic space necessary to cut the nuclear deal: supporting the Arab states but making it clear that this support is not unconditional.

Secretary Clinton’s Iran policy would reverse this. It would put America directly in the middle of the Saudi-Iran cold war and on the side of Arab Sunni states who have a vested interest in making sure that Iran and the United States never normalize relations.

Secretary Clinton should use the opportunity offered by the post–Iran deal opening to confront ISIS, tackle the Syria problem and stabilize Afghanistan and Iraq—all issues that require Iranian input to manage. Instead, her proposed policy is likely to make it more difficult for the United States to have any working relationship with the Iranians and fuel increased sectarianism by creating the impression that the Sunni Arab states are on the “right” side of the growing divide and have done nothing to foment the chaos that has overtaken Middle East.

Iran’s policies in the region remain a challenge for the United States: Tehran backs the Assad regime in Syria and maintains a fierce rivalry with key allies of the United States in the region. This means that Washington can’t normalize its relations with Tehran overnight, and the Iranian leadership isn’t looking for partnership with the United States either. But Secretary Clinton’s stated Iran policy could undo the little progress made so far. It is not just likely to damage the new diplomatic space created between the two countries, but also to undermine the nuclear deal itself. If Iran doesn’t see the impact of sanctions relief and its economy doesn’t begin to recover from decades of economic isolation, it won’t have an interest in continuing the implementation of the deal, let alone engaging with Washington on other substantive issues.

While the Clinton campaign has intimated for some time that Washington must reassure the Sunni Arab states, it has yet to paint a clear picture of what reassurance actually looks like. The United States already sells billions in military hardware to Iran’s Arab neighbors. The U.S. Navy's Fifth Fleet is based in Bahrain. U.S. Central Command maintains forward operations in Qatar. There are thousands of American servicemen and women serving in the Persian Gulf.

Secretary Clinton is clearly the most qualified candidate to be the next commander in chief. But the discussion this election year on foreign affairs has suffered because of the outlandish statements of Donald Trump, making it difficult to engage Secretary Clinton on her foreign-policy proposals. Her initiative to increase pressure on Iran in other theaters will not bring forth Iranian acquiescence to the will of the United States or Sunni Arab States on regional flash points. Only hard-edged diplomacy can do that.