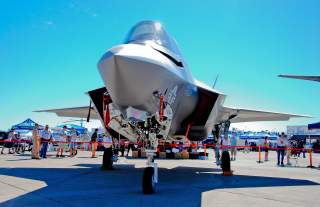 The aircraft in question had a small plastic component on its landing gear door wear out. While the piece was relatively small and insignificant, it nonetheless would have required the entire door assembly to be replaced. However, the Marines were able to print out a new bumper and install it in a matter of days rather than waiting for weeks for a new replacement door assembly to arrive.

“As a commander, my most important commodity is time,” Lt. Col. Richard Rusnok, VMFA-121’s commanding officer, said. “Although our supply personnel and logisticians do an outstanding job getting us parts, being able to rapidly make our own parts is a huge advantage.”

For a deployed unit, the ability to print parts on the go reduces the time it takes to secure new replacement parts and it also saves on the amount of gear the unit needs to take on deployment. For the operational crews, most importantly, 3d printing saves on lost training time and scrubbed operational sorties.

“While afloat, our motto is, ‘Fix it forward,’” Chief Warrant Officer-2 Daniel Rodriguez, CLB-31’s maintenance officer, said in a statement. “3-D printing is a great tool to make that happen. CLB-31 can now bring that capability to bear exactly where it’s needed most—on a forward-deployed MEU.”

VMFA-121 is the first operational Marine Corps F-35B unit to deploy in support of a Marine Expeditionary Unit. The unit and six of its F-35B aircraft are currently deployed onboard the large deck amphibious assault ship USS Wasp. The aircraft arrived onboard the massive 40,000-ton vessel on March 5 earlier this year shortly after Wasp deployed from its homeport of in Sasebo, Japan, on March 3.

Wasp, which deployed with two Arleigh Burke-class guided-missile destroyers, USS Dewey (DDG-105) and USS Sterett (DDG-104) are part of what the Navy calls an “up-gunned Expeditionary Strike Group.” The new up-gunned ESG concept adds an enormous amount of anti-surface and anti-air capability the amphibious unit—especially when the firepower the Aegis-equipped destroyers is combined with the F-35Bs. The idea is to turn the traditional ESG into a force capable to challenging other great powers such as Russia and China in zone there those states are setting up so-called anti-access/area denial bubbles.