How 2 Colonels and a National Geographic Map Divided Korea 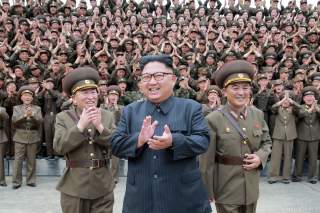 On the evening of August 10, 1945 two colonels convened in an office in the Pentagon to consider an extraordinary assignment. Imperial Japan was then only days away from surrender, and the fate of its subjugated Korean colony was in question. If the State Department did not clarify who would administrate which parts of Korea, then the entire peninsula would fall under the control of advancing Soviet troops.

But where should the dividing line be drawn?

Chris “Tick” Bonesteel and Dean Rusk were not lightweights by any means. Both were Rhodes Scholars, and Rusk would later serve as Secretary of State under presidents Kennedy and Johnson. But neither knew much about Korea.

In his biography As I Saw It, Rusk recalled:

“Bonesteel and I retired to an adjacent room late at night and studied intently a map of the Korean peninsula. Working in haste and under great pressure, we had a formidable task: to pick a zone for the American occupation. Neither Tic nor I was a Korea expert, but it seemed to us that Seoul, the capital, should be in the American sector.”

Using a National Geographic map of “Asia and Adjacent Areas” that lacked provincial borders, the two mid-ranking officers struggled to find a “convenient” boundary—so they settled upon a line at the thirty-eighth parallel north latitude. Rusk conceded that it “made no sense economically or geographically,” but the line fell thirty miles north of the Korean capital of Seoul. Though some officers argued that they should move the line further north to the thirty-ninth parallel, the two officers thought they’d be lucky if the Soviets agreed to the thirty-eighth.

The plan was authorized by President Truman on August 14 and telegraphed to the Soviet Union—which, to their surprise, signaled back its agreement on August 16.

Rusk and Bonesteel could not have known that the line would lead to the permanent division of a nation which had been unified for centuries, separating thousands of families and resulting in a war that would claim nearly two million lives.

For five centuries, the Joseon dynasty ruled a unified Korean state that paid tribute to neighboring imperial China. The peninsular nation fended off a Japanese invasion in the late sixteenth century with the aid of Chinese troops, as well as a domestically built fleet of armored turtle boats and rocket-propelled arrow artillery. As Western colonial powers expanded into Asia in the nineteenth century, the isolationist “hermit kingdom” violently resisted expeditions by the French Army in 1868 and the U.S. Navy and Marines in 1871.

However, modernizing Meiji Japan had noted the success of Western imperialism in Asia, and decided to emulate its industrialization and expansionism lest Japan fall victim in turn. In 1876, Japanese forces pressured Korea into paying tribute to Tokyo instead of Beijing, opening its ports to Japanese traders and allowing Japanese troops to deploy in the country.

Korean Empress Myeongseong tried to resist by appealing for aid from the faltering Chinese Qing dynasty, but Japan dealt China a humiliating defeat in 1894. She then turned to czarist Russia. But in 1895, the Japanese ambassador dispatched a team of assassins and ronin (masterless samurai) who murdered the queen in her palace and desecrated her body.

In 1910 Japan annexed Korea entirely, effectively making it a colony. The Japanese considered Korea to be backwards, so colonial administration set about industrializing the country and instituting public education. Though Korea experienced rapid economic growth and extensive intermigration during this period, the economy was structured to enrich the colonizer, not the colonized.

Conditions worsened during World War II. Korean-language education was banned and nearly half a million Koreans were drafted for forced labor in Japan. Tens of thousands of Korean women also served as “comfort women,” or sex workers for Japanese troops. While recruits were initially voluntary and paid, increasing demand eventually led to women and girls being tricked or forced to work as sex slaves.

Two mutually antagonistic Korean independence movements developed to resist the Japanese—a left wing inspired by international communism, and a nationalistic right wing influenced by Christian missionaries. Independence activists fought a few skirmishes with Japanese troops but were mostly driven out of the country; they instead found bases of support in China, parts of which were also under Japanese occupation. Right-wingers in Chongqing allied with the Chinese Nationalist government, while left-wingers fought alongside the Communist guerillas under Mao.

In the 1943 Cairo Conference, Roosevelt, Churchill and Chinese Nationalist leader Chiang Kai-shek all agreed that Japan would have to forfeit its colonial possessions once defeated. Their declaration stated “great powers, mindful of the enslavement of the people of Korea, are determined that in due course Korea shall become free and independent.”

But that “in due course” was a sticking point. Though Korea had existed as an independent country for centuries, Roosevelt paternalistically did not believe Koreans were ready for self-governance. He envisioned an international “trustee” government should transition the country to self-rule over twenty to thirty years.

Meanwhile, Stalin promised that he would declare war against Japan three months after the defeat of Nazi Germany, which surrendered on May 8, 1945. The Soviet dictator followed his pledge to the day: on August 8, the Soviet Far Eastern Front smashed into Manchuria, steamrolling Japan’s Kwantung Army. The assault included an amphibious landing near Wonsan, Korea on August 12. Russian forces would suffer more than 1,900 killed and wounded in liberating northern Korea.

Washington realized that if it did not reach a deal with Moscow, Soviet troops might soon control the entire peninsula, as the nearest U.S. forces were six hundred miles away in Okinawa. This led to Bonesteel and Rusk’s late-night cram session on Asian geography.

The agreement left sixteen million Koreans in the American occupation zone and nine million in the Soviet sector. The Soviets’ unexpectedly easy acquiesce to the thirty-eighth parallel line may have been in part because, unbeknownst to the American officers, Japan had once offered to split Korea with czarist Russia along the same line. Later, as Japanese influence grew, the Russians proposed dividing Korea along the thirty-ninth parallel, just south of Pyongyang. Some scholars also argue that Soviet force in Korea had been delayed by Japanese resistance around Chongjin and were not advancing as rapidly as Washington thought.

The period of joint U.S.-Russia occupation was intended to last five years and end with the reunification of the country. Neither government consulted any Koreans when arriving at this arrangement.

On August 24, Soviet troops rolled into the city of Pyongyang, greeted by a band mistakenly playing the czarist Russian anthem and jubilant crowds, many of whom had never seen Europeans before.

The Soviets at first tried to recruit Cho Man-sik, an independence activist known as the “Gandhi of Korea” to lead the Provisional People’s Committee in their occupation zone. However, Cho proved to be opposed to foreign trusteeship and not particularly amenable to communism, so he was arrested and likely executed five years later.

The Red Army found a replacement within its own ranks, a major named Kim Il-sung recommended as a suitably charismatic figure to lead the North Korean communists. Kim had led communist guerrillas against the Japanese in China, and then enlisted with Soviet forces in World War II.

Over several years, Kim consolidated his control over the party, displacing its original leaders, and implemented a Soviet-style industrialization and land-reform program. This drove an estimated four hundred thousand landowners and Japanese collaborators to flee to the South.

Meanwhile on September 7, American troops led by Gen. John Hodges landed in South Korea. Hodges ignored local Korean political movements and instead set up his own military administration. However, both left- and right-wing Korean nationalists objected to five more years of foreign rule. Violent protests in the autumn of 1946 spread throughout the major cities in the South and resulted in the death of more than two hundred civilians, striking workers and police.

As mutual trust and goodwill evaporated with the heightening of the Cold War, the joint Soviet-American commission intended to arrange for the reunification of North and South became completely dysfunctional. Travel between the two zones was banned by mid-1946.

Finally, in November 1947 a U.N. commission called for Korea to hold its first-ever election in 1948 to select a national government. However, the Soviet Union refused to hold elections in its occupation zone, claiming they would be biased; therefore, only people in southern Korea got to vote. Korean moderates protested that the vote would likely make the split between North and South permanent. Guerrilla warfare even erupted on Jeju Island off southern Korea after police fired on protesters.

The congressional election finally took place in May 1948, resulting in Syngman Rhee ascending the presidency of the Republic of Korea in July. Educated at Harvard and married to an Austrian woman, Rhee had lobbied for Korean independence in China and the United States since the 1910s; he was a favorite of the American military because of his fluency with English and anti-Communist ideology, though little loved by the State Department due to his difficult personality.