This Is How America Would Fight North Korea in a War 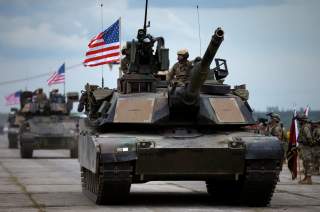 U.S. forces in the northwest Pacific are considerable, amounting to two ground combat brigades, approximately seven wings of fighters and attack aircraft, a handful of strategic bombers, an aircraft carrier, submarines, hundreds of cruise missiles and an amphibious assault task force. That already formidable force can be swiftly augmented by even more combat forces from Hawaii, Alaska, and the continental United States, including F-22A Raptors, airborne troops, and more aircraft carriers, submarines and bombers. It is a robust, formidable, adaptable force capable of taking on a variety of tasks, from disaster relief to war.

The United States has substantial air, land, and sea forces stationed in South Korea, as well as several units based in Japan and the western Pacific earmarked for a Korean contingency. Together, these forces far exceed the firepower of North Korea’s armed forces and represent a powerful deterrent not just against Pyongyang but any potential adversary in the region.

The first U.S. forces that would be involved in a North-South Korean conflict are those currently based in South Korea. On the ground, the U.S. Army rotates a new armored brigade into South Korea every nine months—currently the 2nd Brigade Combat Team, 1st Cavalry Division. Each brigade is manned by 3,500 soldiers and consists of three combined arms battalions, one cavalry (reconnaissance) battalion, one artillery battalion, one engineer and one brigade support battalion. Armored brigade combat teams typically consist of approximately 100 M1A2 Abrams tanks, 100 M2A3 Bradley infantry fighting vehicles and eighteen M109-series self-propelled howitzers.

The other major component of American power in Korea is U.S. tactical aviation. The U.S. Air Force maintains the 51st Fighter Wing at Osan Air Base, consisting of the 25th Fighter Squadron at equipped with A-10C Thunderbolt II ground attack jets and the 36th Fighter Squadron with F-16C/D Fighting Falcon fighters (about forty-eight aircraft in all). The 8th (“Wolfpack”) Fighter Wing at Kunsan Air Base consists of the 35th and 80th Fighter Squadrons, which fly a total of forty-five F-16C/Ds. The A-10Cs have the mission of close air support, while the F-16C/Ds are responsible for air interdiction, close air support and counter-air.

Beyond the Korean Peninsula the United States maintains an array of forces ready to intervene. U.S. military forces in Japan include the forward-deployed aircraft carrier USS Ronald Reagan, two guided missile cruisers and seven guided missile destroyers. Many of the cruisers and destroyers have ballistic missile defense capability although two of the destroyers, Fitzgerald and McCain, are out of action due to collisions with civilian merchantmen. The Reagan and surface warships are all based at Yokosuka, Japan.

Further south, Sasebo, Japan is the home of the amphibious assault ship USS Bonhomme Richard and the ships of its amphibious task force. Together, this amphibious force can lift a marine infantry battalion reinforced with armor, artillery and aviation assets collectively known known as Marine Expeditionary Unit. Sasebo is also the home of the 7th Fleet’s four minesweepers. The result is a well-balanced force that can execute a wide variety of missions, from ballistic missile defense to an amphibious assault.

Marine Corps units are spread out across Japan, with marine fixed wing aviation, including a squadron of F-35B Joint Strike Fighters, tankers and logistics aircraft stationed at MCAS Iwakuni, the only Marine Corps air station on mainland Japan. Three squadrons of Marine helicopter units are stationed at MCAS Futenma on the Japanese island of Okinawa. Marine ground forces include the 4th Marines, a marine infantry regiment with three battalions, and the 12th Marines, an artillery regiment with two battalions of artillery.

Also on Okinawa is the sprawling Kadena Air Base, home of the 44th and 67th fighter squadrons, both of which fly the F-15C/D Eagle fighter. Kadena is also home to a squadron of K-135 Stratotanker aerial refueling aircraft, a squadron of E-3 Sentry airborne early warning and control (AWACS) aircraft, and two rescue squadrons. Farther from a potential Korean battlefield (but still in missile range) Kadena would act as a regional support hub for American airpower, with AWACS aircraft monitoring the skies and controlling aircraft missions while tankers refueled bombers, transports, and aircraft on long-range missions.

The next major American outpost in the Pacific, Guam, is home to Submarine Squadron 15, four forward-deployed nuclear attack submarines supported by the permanently moored submarine tender USS Frank Cable. Naval special warfare units are also based on the island. An army THAAD unit was deployed to the island in 2013 to protect against North Korean intermediate range ballistic missiles.

Guam is also home to Andersen Air Force Base. Andersen typically hosts a variety of heavy aircraft, including B-1B Lancer strategic bombers from Pacific Command’s Continuous Bomber Presence Mission, KC-135 tankers and RQ-4 Global Hawk drones. Andersen served as a jumping off point for bomber raids against North Vietnam and today would see a surge of B-1B, B-2A and B-52H bombers from the continental United States in the event of a flare up in Korea.

U.S. forces in the northwest Pacific are considerable, amounting to two ground combat brigades, approximately seven wings of fighters and attack aircraft, a handful of strategic bombers, an aircraft carrier, submarines, hundreds of cruise missiles and an amphibious assault task force. That already formidable force can be swiftly augmented by even more combat forces from Hawaii, Alaska, and the continental United States, including F-22A Raptors, airborne troops, and more aircraft carriers, submarines and bombers. It is a robust, formidable, adaptable force capable of taking on a variety of tasks, from disaster relief to war.

This first appeared in September.