This Is How China is Winning the South China Sea Showdown 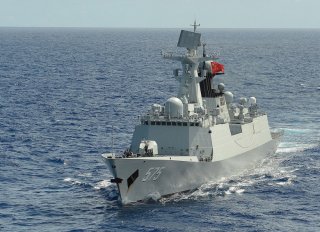 At the opening day of the ASEAN Foreign Ministerial Meeting in Kuala Lumpur, current ASEAN chair Malaysia set the tone by placing the South China Sea disputes firmly on the agenda. “Let this be the day we say we do more,” Malaysian Foreign Minister Anifah Aman said in his opening address.

Australia, as well as several other key ASEAN partner countries, is present at the talks. Foreign Minister Julie Bishop has expressed Canberra's desire for ASEAN to do more, and Bishop said she would 'register' her country’s concerns over the disputes at the meeting.

Australia has of late been more vocal in calling for a resolution of disputes in the South China Sea, through which the majority of its trade is shipped. At the Shangri-La Dialogue in Singapore earlier this year, Defense Minister Kevin Andrews spoke of the need for freedom of navigation in the disputed Sea. This was followed by still stronger wording by Defense Secretary Dennis Richardson.

In the lead-up to the ASEAN gathering, Beijing expressed its view (see MFA report here) that the ASEAN Foreign Ministerial Meeting was not the right place to discuss what it believes are bilateral negotiations. Beijing's bilateralism is in fact a measured carrot-and-stick strategy: a rig in Vietnam's EEZ one day, warm diplomatic overtures the next. It is a strategy that has served Beijing well and split ASEAN thoroughly. As a result, calls for tougher ASEAN talk, let alone action, against construction in disputed areas of the Sea have found little consensus.

Even in the war of words, Beijing has come out on top. Most media, and many foreign leaders, exclusively use the term 'reclamation' rather than 'construction' of artificial islands. It's a term which, while technically accurate, suggests the features are being 'reclaimed' by a rightful owner. Earlier this year ASEAN managed its strongest statement yet, noting that China’s actions were of 'serious concern'. ASEAN's war of words, much like its ability to act, has been dismal.

Singapore, which this week took over the role of coordinator for the ASEAN-China dialogue for the next three years, has expressed its desire for progress in talks and greater unity among the bloc. As one of the region's more agile actors, that could be significant.

In recent years, Cambodia has been a thorn in the side of ASEAN unity on this issue. In 2012 it blocked any ASEAN unity, and since then Chinese investment into Cambodia (and Laos) has increased. The relationship remains strong; a day before ASEAN foreign ministers began thrashing out a position on the South China Sea, Hun Sen was (with impeccable timing) opening a new Cambodia-China Friendship Bridge.

Meanwhile, as ASEAN states search for unity, in the Hague, the Philippines' arbitration case against China's island construction in the South China Sea continues. (See Malcolm Cook’s explanation of the potential winners and losers of the arbitration here.)

If ASEAN can find unity at this meeting on the South China Sea, it will have a far stronger hand at the East Asia Summit in November. But China has already completed a large amount of construction across the South China Sea, and to much surprise on Wednesday, Chinese foreign minister Wang Yi said construction in the area has now stopped. That will throw a big spanner in the works of any final ASEAN statement. From a position of greater strength, it could also see China become more receptive to discussions on a Code of Conduct with ASEAN members.

Once again, it appears Beijing has outmaneuvered a laggardly and divided ASEAN.