How China Would Win a War Against America: Kill Washington's Satellites 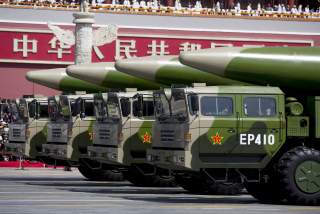 While much attention has been paid to China’s development of traditional ground-based antisatellite weapons, a more nefarious threat to America’s space assets continues to receive far less attention.

“Since 2008, China has been developing a new co-orbital antisatellite weapon (ASAT),” Chow writes. “These ‘space stalkers’ could be placed on orbit in peacetime and maneuvered to tailgate US satellites during a crisis. At a moment’s notice, they could simultaneously attack multiple critical satellites from such close proximity that the United States would not have time to prevent damage.” These co-orbital ASATs are often indistinguishable from benign satellites, yet they are able to knock out satellites in close proximity through various weapons, such as kinetic-energy weapons, explosive charges, fragmentation devices and robotic arms.

China has been testing its capabilities to use space stalkers, by conducting a number of rendezvous-proximity operations in which these satellites fly within striking distance of potential targets. For instance, Chow points to a September 2008 incident, in which a Chinese miniature imaging satellite came within forty-five kilometers of the International Space Station without providing prior notification. Another example came in 2010, when China launched the SJ-12 satellite. Once in orbit, the satellite maneuvered to bump into China’s SJ-6F satellite. Most illuminating, in July 2013 China launched a rocket carrying the CX-3, SY-7 and SJ-15 satellites into space. One of these satellites was equipped with a robotic arm, and once all were in orbit, that satellite grabbed one of the others with its arm.

Space stalkers are only one part of China’s much larger counterspace doctrine. People’s Liberation Army (PLA) writings have continuously stressed the importance of destroying America’s space assets. As the Pentagon recounts in its annual reports on China’s military, “PLA writings emphasize the necessity of ‘destroying, damaging, and interfering with the enemy’s reconnaissance . . . and communications satellites, suggesting that such systems, as well as navigation and early warning satellites, could be among the targets of attacks designed to ‘blind and deafen the enemy.” The reason is not hard to discern; as STRATCOM commander General John Hyten has warned, if enough satellites are destroyed, the U.S. military would be reduced to fighting primitive “industrial age warfare.”

To achieve this, the Chinese military has been acquiring a toxic mix of traditional and new capabilities. “This mix,” Chow writes “is coherently and asymmetrically designed to counter a far more technologically advanced US space capability.”

Among the more traditional threats are ground-based ASAT weapons like the one China used to destroy its own weather satellite in 2007. The space debris that resulted from this test led to widespread international condemnation, including among nominally friendly nations like Russia. Since then, China has continued to test these ASAT weapons in “nondestructive” ways that create minimal amounts of debris. Indeed, Bill Gertz reported that China conducted another test of a new Dong Neng-3 direct-ascent antisatellite missile last month, although that test was unsuccessful. However, if these weapons were actually used to attack satellites, they would generate huge amount of debris, which the world abhors.

As Chow notes, space stalkers, especially those equipped with robotic arms, would produce far less space debris than ascent missiles, making them more attractive to Beijing. Most worrisome, space stalkers can simultaneously destroy many more U.S. satellites than the traditional ground-based ASAT weapons at the opening of a space war, which could result in a space Pearl Harbor. As Chow has explained elsewhere, traditional ground-based ascent missiles typically take about four hours to reach geosynchronous orbits, where many of the most important U.S. satellites are located. This is not the case with space stalkers. Because there is no international or U.S. understanding, any country can preset as many space stalkers as one wants, in close range to another country’s satellites. Consequently, space stalkers could conduct simultaneous attacks on America’s critical geosynchronous satellites, and the warning time would be too short for Washington to defend them.

Ground-based ASATs could reach critical low-earth-orbit satellites in much shorter amounts of time. Nonetheless, killing many satellites at a time would be difficult, “Because a low-Earth-orbit satellite will only fly over a given launch site twice a day and a ground-launched ASAT needs the target to be in view.” This problem would not exist with China’s space stalkers.

More to the point, the United States has been threatened by ground-based ascent missiles for over half a century, so Washington is familiar in how to deal with them. However, America’s current space strategy has been so fixated with ascent missiles that it is wholly inadequate for dealing with the new space stalker threat, and Chow’s greatest contribution is in presenting a new strategy to deal with space stalkers. Once the threat of a space Pearl Harbor is gone, the traditional satellite defenses and those being planned would work far better with the traditional ASAT threats, and other new threats, such as cyber ASAT.

Chow concludes that “the United States as well as other nations should forewarn any party that positioning space stalkers for surprise attack would be treated as an aggressive act and the perpetrator considered an aggressor. Once this position is clearly defined in peacetime, existing and developing defense measures then will have the necessary warning time to defeat the space stalkers and protect the threatened satellites.”

This approach starts from two basic principles. First, once a space object is in orbit, one cannot reliably distinguish a space stalker from an ordinary satellite, especially a spacecraft providing satellite service or a space debris clearer like China’s Aolong-1. Second, routine space operations could bring one or even a few space objects close to another country’s satellites at the same time. These occurrences cannot be prohibited and must be accommodated.

From there, Chow sets out guidelines for a preemptive self-defense approach that draws inspiration from parts of the UN Convention on the Law of the Sea. Namely, Chow proposes that satellites be given contiguous zones (measured by 148 kilometers, but actual size to be determined by the Defense Department) from which they can punish dangerous infringements, while still allowing other satellites innocent right of passage. To differentiate between the two, Chow suggests that the Space Security and Defense Program and National Intelligence Office establish a threshold for the number of satellites another country can place within the contiguous zones of U.S. satellites before triggering a preemptive self-defense response. For example, if the United States set the threshold number at four, and five American satellites were being simultaneously stalked by Chinese counterparts, “the United States can plan to use preemption as the last resort.”

There are mainly advantages to a preemptive self-defense approach. First, it protects against the most damaging attacks, which would come from a knockout blow against many U.S. satellites simultaneously. Secondly, it should be able to gain international support, because there is no legitimate, peaceful reason to tailgate so many satellites from another country. Accordingly, “simultaneously stalking a large number of another nation’s satellites is justifiably treated as hostile intent requiring a last-resort preemption to neutralize such a threat.” Indeed, finding an internationally agreed-upon threshold number would not be in the sole interest of the United States, but also in that of countries like China and Russia, as they’d be protected from America’s own space-stalker capabilities. As Chow argues, “The ultimate purpose of last-resort preemptive self-defense is that it does not actually have to be executed. Therefore, the adversary knowing its space-stalking attack to be futile would not pose a space-stalking threat in the first place.”

Whatever one’s take on Chow’s proposed strategy, the threat he points to is impossible to ignore.