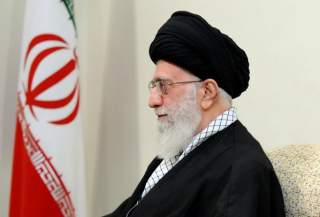 Ahead of the June 30 deadline for a comprehensive nuclear accord with Iran, international negotiators remain puzzled by two questions: “What does Tehran want, and what will it settle for?”

A close reading of Iranian officials’ recent remarks helps place us in their shoes. While the message varies between officials – from the stridency of Supreme Leader Ayatollah Seyyed Ali Khamenei to the more diplomatic rhetoric of President Hassan Rouhani – one theme remains consistent: Iran believes it’s on the ascendant. Such thoughts have roots in Iranian policy.

Iran can now rightly tout that it controls several Arab capitals. In Damascus, the Bashar al-Assad regime continues to wield power over much of the country despite the tide of international opinion having turned against him. In Beirut, the Iranian proxy Hezbollah exercises virtual “veto power” over the fractious Lebanese government. In Baghdad, Tehran wields extraordinary power, overseeing the Iraqi government’s campaign to counter the Islamic State (IS). And in Yemen, Iranian-backed Shiite Houthi rebels control the capital Sanaa and other strategic points.

The Syrian case is particularly instructive. In August 2012, the Syrian Ambassador to Iran exulted that Damascus and Tehran share “similar goals and similar enemies, and God-willing, we will be victorious.” More recently, in September 2014, Khamenei observed, “the realities of the world and the region demonstrate the weakening of the authority of the West…We must understand these realities well in order to avoid incorrect analyses.”

Counselors in the halls of power in Tehran are likely to continue to support Iran’s regional offensive, and are less inclined to believe that the West will confront it or its allies in the region. Such thinking is best exemplified by Admiral Ali Shamkhani, the Secretary of Iran’s Supreme National Security Council, who proclaimed that “the situation in Syria represents Iran’s victory in the region.”

For Iran, its resoluteness on Syria could not have contrasted more sharply with American indecisiveness. The U.S. not only shed all credibility after failing to enforce its own chemical-weapons “red line,” but has failed to follow through on President Barack Obama’s warning three and a half years ago that Assad must “step aside.” Instead, Iran has stood by the maxim promulgated by Qassem Soleimani, the head of the Islamic Revolutionary Guard Corps’ Quds-Force (IRGC-QF): “We’re not like the Americans. We don’t abandon our friends.”

Moreover, in a bid to confront the rise of IS in neighboring Iraq, Obama has even reportedly reached out to Tehran for assistance. For their part, Iranian analysts welcomed the move not as an aberration from three decades of mutual hostility, but as a “natural” gesture by Washington given Iran’s regional stature.

And yet nowhere is Iran’s line of triumphalist thinking more evident than on the nuclear file.

A November 2013 interim deal with international negotiators of the P5+1 led to significant sanctions relief, including economic sectors owned by the state or the IRGC such as petrochemicals. Since then, Iran has twice successfully extended talks in an attempt to ink a comprehensive nuclear accord. While it plays for time, Iran’s economy is looking up, with a particularly significant drop in inflation.

In the aftermath of the interim agreement, an Iranian brigadier general scoffed at the West for practically “begging” after Iran learned how to enrich uranium to 20 percent purity. Later, by not publicly chastising Iran for its incremental transgression of the interim agreement, negotiators have reaffirmed Tehran’s long-standing suspicion that the international community has more to lose from talks collapsing than does the Islamic Republic. The opposite is in fact true.

Khamenei has put it best. Highlighting the nuclear file as “a sign of the enemy’s weakness,” the supreme leader opined, “America and European colonial countries have gathered together so they can bring the Islamic Republic of Iran to its knees on the nuclear case. But they have not, and in the future, they shall not.”

Ahead of the next negotiation deadline on June 30, the United States’ most effective tools for gaining leverage are the threat of punitive financial and economic sanctions for failing to reach a comprehensive nuclear deal – all of them linked to rigid deadlines. Short of that, Iran will continue its delay tactics, pocketing international concessions while incrementally expanding its program.

Divining foreign adversaries’ objectives is never easy – certainly not when those adversaries’ decision-making apparatus is as opaque as that of the Islamic Republic. Still, by putting themselves in Iran’s shoes, international negotiators can find ways to make it exceedingly costly for Iran to stay its nuclear course, and to force Khamenei to reach for “the poisoned chalice” of compromise.