How a Little British Frigate Took on Communist China—and Won 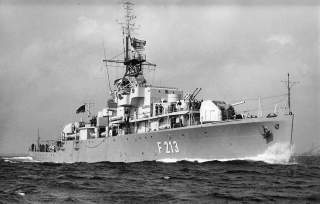 The date was April 1949, and China was aflame in civil war. The nationalist regime of Chiang Kai Shek convulsed in its death throes before the advance of Mao Zedong's communist armies. And on the mighty Yangtze river—the third-longest in the world—sailed the British frigate HMS Amethyst.

There was nothing special about the Amethyst in size or reputation. Built in 1942, it was one of hundreds of cheap, expendable little escort vessels churned out by British shipyards to protect convoys from Nazi U-boats. At just 1,350 tons, Amethyst was a pipsqueak compared to the aircraft carriers and battleships that garnered all the glory. The frigate's record during World War II was competent but not spectacular, with just one sunken U-boat to its credit.

So how did Amethyst end up in a 101-day crisis that almost sparked a war between Britain and communist China? Because no one else wanted the job. Since the nineteenth-century, foreign warships had operated in Chinese waters to protect foreign citizens or business interests. In the spring of 1949, the British sought to relieve the destroyer HMS Consort, which stood guard at the nationalist capital of Nanking. It was telling that both the United States and Australia declined to offer a relief ship.

Britain lacked any official contact with the communists, who were about to cross the Yangtze on their way to Nanking. Nonetheless, Amethyst was ordered to sail 200 miles up river to replace Consort and stand by to evacuate the British embassy at Nanking.

The Amethyst left Shanghai on April 19, 1949, with a crew of 171, some assorted Chinese cooks and launderers, and Simon the cat. At first, it seemed like another cruise on the China station. Until on the morning of April 20, communist artillery batteries, antitank guns and machine guns emplaced on the banks of the Yangtze opened fire at close range.

Armed with only six four-inch (102mm) antiaircraft guns, the unarmored frigate was no match against dug-in and camouflaged shore batteries firing at close range. The bridge was hit and Amethyst's captain, Lt. Cmdr. Bernard Skinner, mortally wounded along with dozens of other casualties. Despite a shrapnel wound to the chest, the ship's executive officer, First Lt. Geoffrey Weston, took command as the battered frigate ran aground. Weston ordered those crew who could be spared to abandon ship and head for nationalist lines. About seventy men, plus twenty-five wounded and several corpses, remained behind while rifles were passed out to stop any communist attempt to board the vessel.

Eventually the bombardment ceased. But Amethyst lay trapped under numerous hostile guns that could blow it out of the water in a heartbeat.

HMS Consort to the Rescue

Down from Nanking came HMS Consort to tow the Amethyst to Shanghai. "HMS Consort came steaming down river, her battle ensigns flying, and she let go with everything she had, which made us feel so grateful that we stood up and cheered," recalled one of Amethyst's sailors, according to author Brian Izzard's Yangtze Showdown: China and the Ordeal of the HMS Amethyst.

On the first try, communist howitzers and antitank guns opened up a withering barrage: though Consort claimed to knocked out several enemy guns, three of the destroyer's four 4.5-inch cannon were knocked out and many crewmen injured. No one would have blamed the Consort's captain, Cmdr. Ian Robinson, or retreating. Instead, Consort turned around and made a second try in the face of heavy fire. Yet the odds were too great for the gallant destroyer. "We'll be back in the morning," Consort signaled Amethyst before continuing down to Shanghai.

The Naval Charge of the Light Brigade

What could be done? In the nineteenth-century, Britain would have dispatched a punitive expedition to save Amethyst and punish China. Yet by 1949, Britain was nearly bankrupt from the First and Second World Wars, even as it faced the Soviet threat in Europe and imperial commitments in the Middle East, Africa and Asia. The aircraft carriers in the Far East had been withdrawn: the nearest British warplanes were almost 3,000 miles away in Singapore.

Yet in the best Royal Navy tradition, another attempt would be made to rescue Amethyst. This time, sailing to the rescue would be the heavy cruiser HMS London and the frigate HMS Black Swan, flying large white flags as well as British ensigns. On paper, a formidably armed and armored heavy cruiser sounds overwhelming. In reality, the British should have minded the words of their most famous admiral, Horatio Nelson: "A ship's a fool to fight a fort."

Even protected by 4.5-inches of armor, the London would be a big, slow target for communist shore batteries firing at close range. British commanders, as well as the London's captain, knew that this was practically a suicide mission. They could only hope that the communists would hold their fire.

The communists didn't. Though London fired off 600 eight-inch and four-inch rounds, it could not suppress the enemy guns. After multiple hits, a shattered bridge and sixteen dead, both ships retreated back to Shanghai.

A young lad on the wheel conning the ship and listening to orders on the voice pipe, surrounded by men putting out the fire. He was brave. What I did not realize at the time was that the main control of the rudder had gone, and that all of us were in his hands. When you think that we were in a river which was getting narrower and all of us were relying on him. One young lad. It is very hard to describe that scene.

And where was the air support that might have suppressed the communist shore batteries? Feisty Winston Churchill and other opposition politicians demanded to know why the Labor government of Prime Minister Clement Attlee hadn't ensured air cover from carriers and land-based planes. And why was Amethyst even sent to Nanking, when transport aircraft could have evacuated the British embassy?

Attlee replied that British air bases in Singapore were too far away for land-based warplanes. Perhaps more important, if British aircraft attacked Chinese communists, it would have been an act of war. In truth, Attlee was right. In 1949, Britain was in no position to go to war with the most populous nation on Earth. Nothing would have delighted the Soviets more than if Britain—and rival communist power China—became embroiled in conflict just as would happen to the United States and China over Korea.

Nothing to Do But Wait

Meanwhile, the Amethyst and its crew could only wait as spring changed to broiling summer and supplies ran low. Most worrisome was that fuel was running so low that the ship might not to be able to escape. To save fuel, the power was switched off at night, including the air conditioning. That didn't stop Simon the cat, though wounded, from continuing his relentless hunt against the rats.

However, the most excruciating part was yet to come. By early May, the communists suggested that they were willing to negotiate. The British would discover what the Americans later learned in Korea: to the communists, diplomatic negotiations were just another weapon. There were endless delays over minutiae such as as which British and Chinese officials were authorized to negotiate. However, the real sticking point was the demand that Britain admit that the Amethyst had invaded Chinese waters and opened fire first. But why should the communists hurry? The Amethyst's crew could only wilt in the heat as they ate the last of their rations—or bought food at exorbitant prices from local traders. Their only link with home and rescue was the ship's radio transmitter, manned by a young sailor who kept himself going with Benzedrine.

There are times when the Amethyst's ordeal reads like an adventure novel. At one point, a Sunderland flying boat of the Royal Air Force landed in the water near Amethyst: under heavy fire, it unloaded medical supplies and a doctor into a Chinese sampan. When the sampan's crew balked under the bombardment, a British sailor convinced them to deliver the cargo—at gunpoint.

Now enters another unlikely actor. "Lieutenant Commander John Kerans was the wrong man in the right place," Izzard writes. Kerans was a difficult man who had been dumped in the Far East as the twilight of a lackluster career. But he was available to relieve the wounded Weston, and so he made his way overland through nationalist lines from Nanking to the Amethyst.

Escape Down the River

The situation could not last. By July, Kerans decided the Amethyst had to escape while it had sufficient fuel and a crew still on its feet. The plan was to sail 200 miles down the Yangtze to reach the open sea where other British ships could escort them home. Kerans ordered deck equipment to be removed to change the frigate's silhouette. He also quietly informed the crew of the plan, but not the eight Chinese helpers on board. "I was perfectly prepared if necessary to shoot my Chinese if all else failed," he later admitted (they were safely locked below during the escape).