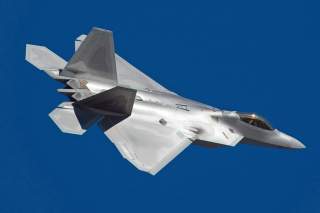 Lockheed Martin and the United States Air Force have been working on improving the performance of the F-22 Raptor’s stealth coatings.

While the Raptor is by far the most capable air superiority fighter ever built, its Achilles’ Heel since it entered service has been maintenance. The F-22’s sensitive radar absorbent coatings have proven to be costly and difficult to repair, but the Air Force and Lockheed have been working on improving the performance. Those efforts are starting to payoff as Lockheed has completed work on the first Raptor to enter the company’s Inlet Coating Repair (ICR) Speedline facility—delivering the aircraft back to the U.S. Air Force ahead of schedule.

According to Lockheed, the company received a contract to establish the Speedline facility in Marietta, Georgia, in August 2016. Currently, Lockheed is on contract to repair 12 Raptors, but the company expects follow-on contracts as the Air Force will need to continually repair the jets. Thus far, Lockheed is working on two jets at the Speedline in addition to one that was just delivered.

Lockheed notes that the recent increase in the number of F-22 deployments—particularly the ongoing operations in the Middle East—have increased the demand to its stealth repair services. The jet always required periodic overhauls to maintain its very low radar signature, however, the current workload is greater than usual.

While the F-22 might no longer be in production, Lockheed is heavily involved in keeping the Raptor fleet flying. Lockheed provides sustainment services to the F-22 fleet through a comprehensive weapons management program called Follow-on Agile Sustainment for the Raptor (FASTeR). With a fleet of only 186 operational jets—of which only 120 are “combat-coded”—the Air Force needs every flyable Raptor it can get.

The Air Force is continually working to improve its F-22 fleet, which is the core of its air superiority capability. Currently, the Raptor fleet is operating in an Increment 3.2A/Upgrade 5 configuration that finally allows the jets to carry the AIM-9X Sidwinder high off-boresight missile, but the weapon won’t be fully integrated into F-22’s systems until the Increment 3.2B configuration is fielded. Even then, it won’t be until later upgrades that the jet will be equipped with a helmet-mounted cuing system for that weapon.

As with all combat aircraft, the Raptor is in a constant state of evolution. Indeed, in many ways, the Raptor that is flying to today is in many ways a much more capable airframe than the jet that was declared operational in 2005—even though they are literally the same aircraft. And the aircraft will continue to evolve well into the future until eventually a successor takes its place.