How to Man the Unmanned: 3 Ways the US Military Can Hire More Drone Pilots 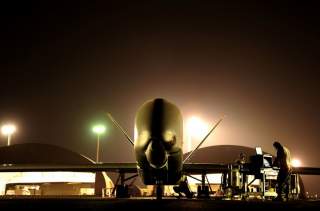 In the New York Times this past Tuesday, Michael Schmidt wrote of how the the US Air Force (USAF), “Running Low on Drone Pilots,” is turning to contractors to reconnoitre battlefields. Many of these are “former drone or fighter pilots who are making double or triple their military salaries.” Speaking to the Times, Fred Roggero, a retired Air Force general who’s now a drone consultant, thinks that the military will continue to train, and pilots will continue to exit. Thus, the “critical manning shortfalls” about which the Government Accountability Office (GAO) complained in its recent report may not get better fast. Indeed, the problem could get worse: plans for more, cheaper drones will require yet more pilots, unless the drones can be taught to operate more autonomously—and that bears along its own problems. So what should work cheaper than not? And what would work better than not?

This question has come up fast. As Caitlin Lee wrote in Aviation Week back in April, as recently as 2012 the USAF was figuring on disposing of many of its drones. Fortunately, the military services have clear options. To frame the question, consider how the Army and the Air Force fly more-or-less the same plane quite differently. As Stanton Coerr and I wrote for an AUVSI conference back in 2011, both

…operate similar versions of MQ-1 aircraft on similar missions, but their approaches to manning them differ radically. Army controllers are enlisted soldiers who proceed from high school to flight school; Air Force pilots are college-educated officers. Most Army fliers have never flown manned aircraft; until recently, all Air Force drone pilots were required to have done so. The Army rotates its flight crews to war zones along with their planes; the Air Force keeps the planes in-country, and the flight crews in Nevada.

Ceteris paribus, the Air Force’s commissioned officers come with greater experience and higher education, but the Army’s hiring from high school and training ab initio on drones is cheaper. On the other hand, the Army’s co-locating the flyers with the ground troops enhances their understanding of the battlefield, but the Air Force’s centralized operating model is cheaper. So from here on, what are the options?

The article in the Times groused about paying the mercenaries more than the military. Even apart from flying opportunities outside the service, pilots are hard to keep, as they’re generally ambitious and talented people. Drone pilots have the additional opportunity to join a burgeoning industry. In recognition of their alternatives, the Air Force has begun paying them bigger bonuses than the jet jockeys. As announced last year, the USAF will now pay bonuses of up to $15,000 annually for the cubicle jockeys to stay for multi-year commitments. If that seems offensive in the silk scarf crowd, don’t take it personally—it’s just economics. The problem is that the pay-and-benefits approach will still only get the Air Force so far so fast. Military compensation schedules are a matter of law, and the Congress isn’t the most responsive institution in the country. There’s even a point at which paying lieutenants more than senators may seem unseemly.

After considerably hesitancy last year, the USAF rather embraced the idea of enlisted  pilots for its unmanned aircraft. The service then doubled the class size, and further opened Global Hawk operator seats to any airman in the ranks of staff sergeant through senior master sergeant. (The exception was for troops in the similarly high-demand fields of aircraft maintenance, missile maintenance, nuclear weapons, cyber, or battlefield work. Then you need your staffing manager’s release to apply.) The choice of plane was notable. Operating a MQ-1 Global Hawk is like operating an Army drone—it’s a mouse-clicking operation that’s more akin to managing the flight than flying the airplane. All the same, the Senate Armed Services Committee would like the USAF to use enlisted pilots for the majority of its missions. So the Regular Air Force and the Air National Guard have begun discussing opening strike missionswith stick-and-throttle MQ-9 Reaper aircraft to enlisted pilots too.

In its recently-released 2015 Summer Study Autonomy, the Defense Science Board mused that the services ought to look for acumen for working with autonomous systems when recruiting. In the US Navy of the 1920s, the safe career path may have seemed found in the battleships, but the more enterprising went for aviation and submarines. Many stayed to become war-winning admirals in the 1940s. Autonomous systems are proving their worth all over the world, but sometimes in unusual places first. As the Times reported back in April, an upstart Californian company called Zipline is establishing the world’s first drone delivery service—just in Rwanda, one of the poorest countries anywhere. The dreadful road network makes that important. There’s a parallel in how impressive wireless service in Afghanistan became, in part because landlines were never an option. The people who establish these kinds of businesses are pretty enterprising, and that’s essential to success when breaking new ground. So how does the military identify people of this type? Frankly, the services seem to have no strong mechanism, and that’s a shame.