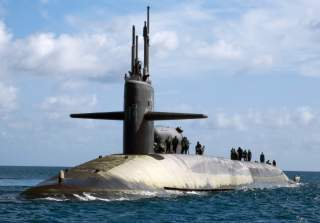 The Pentagon has released initial figures for how much it will cost to build a new, controversial submarine-launched low-yield nuclear warhead.

This week, Defense News reported that the Department of Defense has said that it will spend $48.5 million during the next five years to develop the capability for a low-yield warhead to be launched from America’s existing submarine-launched ballistic missiles. The figure was included in a written submission the Pentagon provided to Congress. The submission was obtained by the Union of Concerned Scientists who shared it with Defense News.

The breakdown of the costs are $22.6 million for FY 2019, $19.6 million in FY 2020, $3.2 million in FY 2021, $1.5 million in FY 2022 and $1.6 million in FY 2023. Of course, these numbers could very well change if technical challenges are encountered during development. More importantly, the figure does not include funding for the Department of Energy. The National Nuclear Security Administration (NNSA), a semi-autonomous agency within the Department of Energy, has co-responsibility with the Pentagon for developing the new capability. NNSA’s budget request for FY 2019 does not include any funding for the new warhead. In testimony to Congress this week, Lisa Gordon-Haggerty, the head of NNSA, said that “We are leaning as far forward as we possibly can, working with OMB and [the DOD]” on securing funding for the new warhead in the upcoming fiscal year. It is unclear how funding will be divided between the Department of Defense and NNSA for development of the low-yield submarine-launched ballistic missile (SLBM).

Bringing back sea-based nonstrategic nuclear weapons has been the most controversial part of the Nuclear Posture Review (NPR) the Trump administration released earlier this year. The United States previously possessed this capability in the form of the nuclear Tomahawk land-attack cruise missile (TLAM/N), along with earlier weapons like the SUBROC, ASROC, and nuclear Terrier. The TLAM/N was retired during the Obama administration, although they hadn’t been deployed since the Clinton administration.

The Trump administration’s NPR envisions bringing back nonstrategic nuclear weapons on naval warships in a two-prong process. The near term option is creating a new low-yield warhead that will fit on America’s existing Trident II SLBMs. This is the capability the Pentagon is requesting $48.5 million to develop. In the NPR, the Pentagon describes this as a “comparatively low-cost and near-term modification to an existing capability that will help counter any mistaken perception of an exploitable ‘gap’ in U.S. regional deterrence capabilities.” It also says that “doing so will not increase the number of deployed U.S. ballistic missile warheads, as the low-yield weapons will replace higher-yield weapons currently deployed.”

A number of criticisms were made against this proposal, including whether acquiring it is necessary. The United States already maintains tactical nuclear bombs that can be delivered by aircraft. Since the Pentagon mostly framed the need for sea-based nonstrategic nuclear weapons as a response to Russia, some critics argued that the existing tactical nuclear weapons in Europe were sufficient to deter Moscow.

Other critics contend that placing low-yield warheads on the existing Trident IIs would create a discrimination problem. Since America’s current SLBMs only carry strategic warheads, an enemy under attack by SLBMs would know they are carrying high-yield nuclear weapons. If the United States placed some low-yield warheads on SLBMs, Moscow or Beijing wouldn’t know whether SLBMs headed towards their territory were tactical or strategic. The critics’ concern is that countries would assume that it was a strategic attack and respond accordingly, even if America had only launched tactical weapons.

Some observers pushed back against these concerns. For instance, Austin Long pointed out that the United Kingdom already deploys a low-yield warhead on its Trident IIs. Thus, a country like Russia already cannot be sure whether SLBMs heading towards its territory are armed with tactical or strategic warheads. Supporters of the Nuclear Posture Review also argue that the point of building these low-yield nuclear weapons is to deter adversaries from believing they can get away with using their own nonstrategic weapons. The Americans would not be launching tactical weapons against a country that hadn’t already used its own nuclear weapons.

Aside from the near-term option of creating a low-yield warhead for the Trident, the Nuclear Posture Review also calls for developing a new sea-launched cruise missile (SLCM) along the lines of the TLAM/N. In doing so, the NPR says that the Pentagon will leverage “existing technologies to help ensure its cost effectiveness.” In describing the rationale for a new cruise missile, the NPR says the “SLCM will provide a needed non-strategic regional presence, an assured response capability, and an INF-Treaty compliant response to Russia’s continuing Treaty violation.” It also pledges that the United States might consider not developing the SLCM “if Russia returns to compliance with its arms control obligations, reduces its non-strategic nuclear arsenal, and corrects its other destabilizing behaviors.” To add credence to this possibility, the NPR points out that America’s deployment of Pershing II intermediate-range ballistic missile in Europe in the early 1980s helped pave the way for the signing of the Intermediate-Range Nuclear Forces (INF) Treaty.

Some unofficial advisors to the NPR have stated publicly that another reason the Pentagon is developing a new SLCM is to guard against the possibility of America needing theatre nuclear weapons in the Indo-Pacific region ten or twenty years down the line. Unlike America’s current air-launched tactical nuclear warheads, sea-based ones don’t need to rely on allies hosting the weapons on their territory. This would be especially beneficial in Asia given Japan’s views on nuclear weapons and the escalatory nature of re-deploying tactical nuclear weapons in a place like Korea.