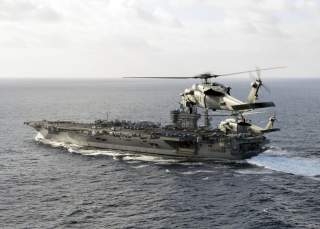 Aircraft carriers and submarines are considered some of the most sophisticated weapons in the U.S. arsenal. As a result, they became symbols of American power projection. Without nuclear energy, however, submarines and aircraft carriers would be limited in their operational capabilities, and their cost of ownership would probably increase.

Admiral Hyman G. Rickover, known as the “father of the nuclear navy,” led efforts to develop the world's first nuclear-powered submarine, USS Nautilus (SSN 571), which began operation in 1954. Nuclear naval propulsion allows aircraft carriers and submarines to run with heat provided by onboard nuclear reactors. Power generated from the reactor, as a result of nuclear fission, allows air to be continuously recycled. Heated water, distilled from seawater, produces steam which powers turbines and turbo generators.

Because nuclear reactors create energy through fission instead of burning fuel, no greenhouse gases are emitted. Nuclear energy is completely self-contained. The waste produced by nuclear power is stored in the reactor and disposed of all at once when the vessel is decommissioned or when the reactor is refueled. Nuclear power aboard these ships is designed to be reliable and self-sufficient to avoid extensive maintenance and repairs which would have to be undertaken thousands of miles from its home port.

Prior to naval nuclear propulsion, submarines ran on diesel engines. As a result, subs were only capable of staying underwater for limited periods of time through the use of batteries. The downside to this was that subs would have to surface or snorkel to charge their batteries. This changed when nuclear power allowed submarines to operate underwater at higher speeds than predecessors for unlimited periods of time. The only limiting factors for how long and far a submarine operates are the crew’s endurance and supplies. Hence, nuclear power eliminated the need for massive quantities of ship fuel, reducing logistical demands of fleets at sea.

After experiencing success with nuclear-powered submarines, the Navy’s first nuclear-powered aircraft carrier began operation in 1961, the USS Enterprise (CVN 65). The Enterprise traveled more than one million nautical miles before it was decommissioned this year.

U.S. carrier air wings are able to project power against the land from a sovereign base at sea. This allows more freedom of action because the U.S. does not need permission from nearby countries to utilize military bases and conduct operations. Aircraft carriers also act as a centerpiece of naval forces to exert sea control and to deploy a wide array of aerial platforms, leading some to consider it the nation’s number-one asymmetric military advantage. This can be seen by prospective adversaries’ expensive efforts to place nuclear-powered aircraft carriers at risk.

The first extended production program for nuclear-powered carriers was the Nimitz class. Today all 10 of these remain on active duty. While America has the largest carrier fleet in the world, the total number of ships is below what is required by federal law. According to 10 U.S. Code § 5062, the U.S. Navy should not have less than 11 operational aircraft carriers. This is why it was particularly important when President Donald Trump publicly acknowledged this year that the U.S. Navy needs to increase its total number of aircraft carriers. The next generation of nuclear-powered carriers, led by the USS Gerald R. Ford, will begin joining the fleet later this decade. The USS John F. Kennedy is expected to join the fleet in 2020 and the USS Enterprise in 2025.

The number of aircraft carriers the U.S. has is critical for future military success. It takes about 12 ships during peacetime to keep four ships at sea at all times. For every one ship at sea, another is training and being outfitted while another has returned and is standing down. During a crisis, however, the number could surge. For instance, during the 1991 Persian Gulf War, the U.S. Navy surged six aircraft carriers to participate in the air war against Iraq.

Without nuclear power, submarines would not be able to remain continuously submerged and could be targeted by potential adversaries. Nuclear power has ensured that costs that would otherwise be spent on shipping fuel and other logistical needs to and from submarines and aircraft carriers remain low, freeing these financial resources to be spent on necessary fighting equipment and troops. Hence, nuclear energy has boosted U.S. military might by powering submarines and aircraft carriers and extending naval power projection capabilities.