This Is How One Gutsy Harrier Pilot Survived ‘Catastrophic’ Engine Failure 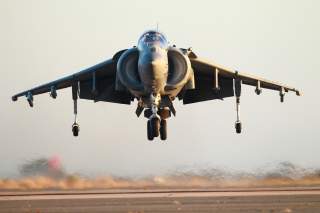 With Marine Corps Class A aviation mishaps at a five-year high, the branch’s decision back in April to extend the life of the AV-8B Harrier attack aircraft — an about-face from an earlier 2014 replacement program despite the jump-jet’s hazard-prone record — seemed strange. But a new internal Department of Defense investigation captures the stark consequences of the accident-prone aircraft’s newfound lease on life.

On March 8, 2016, a British Royal Air Force pilot deployed with Marine Medium Tiltrotor Squadron 162 (reinforced) aboard the USS Kearsarge in the North Arabian Gulf narrowly escaped death when his Harrier burst into flames during takeoff, as Military.com reported at the time. But while the pilot, assigned to the 26th Marine Expeditionary Unit as part of an international training exchange program, managed to walk away without a scratch, a new Pentagon investigation obtained by Military.com paints a grim picture of the incident.

Frankly, it’s a miracle the 29-year-old flight lieutenant walked away at all. The Harrier was loaded up with munitions as part of the 26th MEU’s seven-month deployment with the Kearsarge against ISIS in Iraq and Syria; the aircraft’s $63 million in damage included “$245,000 in ordnance jettisoned to avoid ‘cooking off.’”

And that’s not even including the fuel. “I saw the clamshell panels blow upwards and outwards with a large ball of flames right behind it,” one witness, a Marine gunnery sergeant, said in a statement, according to Military.com. “A few seconds later, I saw fuel on the deck start spreading underneath the jet and drifting forward to the nose …  At this point, the fuel ignited covering the entire jet nose to aft in fire.”

Although the investigating officer who authored the Pentagon report described the incident as “catastrophic” — the subsequent explosion and fire crippled two other Harriers and a ton of other expensive equipment — the branch concluded that it was “unable to determine” the exact cause of the incident. The RAF pilot “executed all emergency procedures in an exemplary manner by exercising good judgment despite facing unique and unforeseen circumstances,” according to the report.

As Military.com notes, the March incident was just one of three Harrier-related aviation mishaps to afflict the Corps in 2016 alone; in September of that year, the Corps ordered a temporary operational pause on Harrier jets with the III Marine Expeditionary Force after a third mishap in the Pacific Ocean near Japan. The causes of those two incidents, according to Military.com, “have yet to be made public.” And people wonder why they call it “The Widowmaker.”