How Russia and China Would Wage War Against America: Kill the Satellites 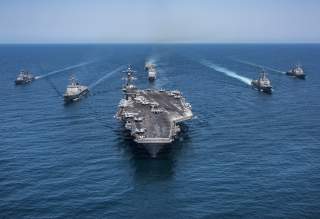 Russia and China are actively pursuing new weapons and capabilities to counter America’s dominance of space according a U.S. Intelligence Community assessment. Indeed, both nations are considering the development of weapons that could attack U.S. satellites and other space-based assets in orbit.

“We assess that Russia and China perceive a need to offset any U.S. military advantage derived from military, civil, or commercial space systems and are increasingly considering attacks against satellite systems as part of their future warfare doctrine,” reads congressional testimony from Daniel Coats, director of National Intelligence on May 11. “Both will continue to pursue a full range of anti- satellite (ASAT) weapons as a means to reduce U.S. military effectiveness.”

The two great powers—which seek to offset America’s advantages in that domain—are continuing the development of such capabilities despite public statements that would curtain an arms race in space. “Russia and China remain committed to developing capabilities to challenge perceived adversaries in space, especially the United States, while publicly and diplomatically promoting nonweaponization of space and ‘no first placement’ of weapons in space,” Coats stated. “Such commitment continues despite ongoing US and allied diplomatic efforts to dissuade expansion of threats to the peaceful use of space, including international engagements through the U.N.”

However, when electronic warfare and cyber-weapons fail to achieve their desired objectives, the Russian and Chinese are prepared to use kinetic force to physically destroy American space assets. “Some new Russian and Chinese ASAT weapons, including destructive systems, will probably complete development in the next several years,” Coats stated. “Russian military strategists likely view counterspace weapons as an integral part of broader aerospace defense rearmament and are very likely pursuing a diverse suite of capabilities to affect satellites in all orbital regimes.”

But it’s not just the Russian military; policymakers in Moscow are also promoting anti-satellite weapons in the view of the U.S. intelligence community. “Russian lawmakers have promoted military pursuit of ASAT missiles to strike low-Earth orbiting satellites, and Russia is testing such a weapon for eventual deployment,” Coats stated. “A Russian official also acknowledged development of an aircraft-launched missile capable of destroying satellites in low-Earth orbit.”

On the other side of the world, China is on the verge of fielding an operational anti-satellite weapon. Meanwhile, both great powers are working on developing directed energy weapons to counter American satellites. “Ten years after China intercepted one of its own satellites in low-Earth orbit, its ground-launched ASAT missiles might be nearing operational service within the PLA [People’s Liberation Army],” Coats stated. “Both countries are advancing directed energy weapons technologies for the purpose of fielding ASAT systems that could blind or damage sensitive space-based optical sensors. Russia is developing an airborne laser weapon for use against US satellites.”

Additionally, both nations are developing satellites that can either tamper with other space assets or if necessary collide with and destroy an enemy orbital vehicle. “Russia and China continue to conduct sophisticated on-orbit satellite activities, such as rendezvous and proximity operations, at least some of which are likely intended to test dual-use technologies with inherent counterspace functionality,” Coats stated. “For instance, space robotic technology research for satellite servicing and debris-removal might be used to damage satellites. Such missions will pose a particular challenge in the future, complicating the U.S. ability to characterize the space environment, decipher intent of space activity, and provide advance threat warning.”

Thus, as time goes on, the Pentagon will have to invest more to ensure America retains its superiority in space.