How Russia Could Intervene in a Venezuelan Civil War 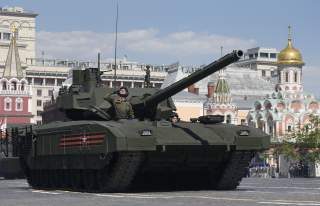 Venezuela’s political chaos, violence and a full-blown economic depression risks taking down one of Russia’s most important allies in the Western Hemisphere.

Years of high oil prices and a pro-Kremlin government brought billions of dollars worth of Russian investment and military sales into the country — which now gives Venezuela one of the most capable air forces in Latin America.

While China has hedged its bets and reached out to Venezuela’s opposition, Russia remains closely tied to the government, such as via the oil industry. Were the crisis to deteriorate further, Russia could not intervene to the same extent as it did in Syria due in large part because of distance.

Nevertheless, the possibility of a total Venezuelan collapse is gaining attention in the Russian military press. One noteworthy recent article by Konstantin Strigunov in the July 2017 of Voenno-promyshlennyi kur’er, or Military-Industrial Courier, an influential Russian journal covering military affairs, sketches out options in a hypothetical Venezuelan civil war.

Note that Strigunov’s article does not reflect Russian policy, but it’s worth reading given VPK‘s influence and the coterie of military officers who read and write for it.

First of all, Strigunov assumes that Venezuela’s opposition — and the daily clashes between protesters and the security forces — is linked to support from the United States in an attempted “color revolution” aimed at toppling an unfriendly regime. He does not provide evidence for these assertions, but he says that Russia should prepare for the possibility of the opposition, supported by “irregular formations of mercenaries,” drug cartels and “external interests” successfully toppling the Venezuelan government.

“From the point of view of Russia’s interests, the scenario is extremely unfavorable,” Strigunov writes, and in an echo of the domino theory that guided U.S. policy in Southeast Asia during the 1960s, argues that friendly governments in Cuba, Bolivia, Nicaragua and Ecuador could follow Venezuela down the drain.

But because Russia’s ability to intervene is limited, unlike Syria, “it is in our best interest to assist the current leadership of the country … by carrying out feasible assistance of the broadest spectrum.”

The VPK article states the best way for the Kremlin to accomplish this is by strengthening relations with the ALBA states — a coalition of left-leaning states in the Western Hemisphere, although that alliance’s influence has waned. Secondly, Russia should provide military-intelligence aid for Venezuelan counter-insurgents.

“In addition, it is in our power to find common ground with leftist groups to use them in a proxy mode on the side of the legitimate government of Venezuela.”

An obvious collection of groups to provide such support would be colectivos, or pro-government armed militias which developed from state-backed community organizations. Well-armed, motorbike-riding colectivos have frequently attacked journalists and anti-government demonstrators. In July, colectivos beat opposition politicians with pipes in the National Assembly, openly demonstrating a willingness to use force to keep the government in power — although the militias often act independently.

“Maduro gets more desperate by the hour,” CIA director Mike Pompeo told the U.S. Senate in May 2017. “The risk of these colectivos acting in a way that is not under his control increases as time goes on as well”

To be sure, Strigunov does not mention these groups by name, and there is no evidence Russia does supports them directly — which is unlikely — or will in the future. But it’s quite feasible for Russian weapons to work their way to the paramilitaries. The Zamora Plan, a regime contingency operation, authorizes the Venezuelan government to arm militias in case of a coup or civil war. Russia has sold tens of thousands of Kalashnikov rifles to the Venezuelan military in recent years.

This kind of theorizing about supporting proxies to ward off “color revolutions” is also not new or unusual in Russian military doctrine, so Strigunov is not suggesting the Kremlin do anything it hasn’t done elsewhere.