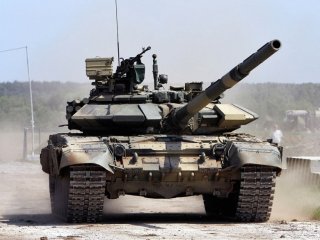 Russia’s Uralvagonzavod is willing to allow Iran to license-build the T-90S main battle tank domestically once restrictions are lifted on technical cooperation with Tehran. The Russian company is also willing to help Iran modernize its existing T-72 fleet. Tehran, however, seems to have decided that it can build its own tanks without Moscow’s help.

The addition of the T-90 would greatly enhance Iran’s conventional forces, which are largely equipped with antiquated Russian and Chinese designs interspersed with some newer Soviet models. Though it is ultimately a highly modernized version of the Soviet-era T-72, the T-90 series tanks are, nonetheless, formidable fighting machines—according to U.S. Army officials—that are more capable than anything Tehran currently possesses. The fact that Iran has decided to build its own “indigenous” tanks rather than purchase the sophisticated T-90 (for now) can really only be seen as a positive development for the United States and its regional allies.

“If restrictions on military-technical cooperation with Iran are lifted, the corporation together with Rosoboronexport is ready to continue cooperation, in particular, on the licensed production of the T-90S tanks, modernization of the T-72S tanks and their production capacities,” Uralvagonzavod’s deputy director general Alexey Zharich recently told the TASS news agency.

While Tehran had been interested in purchasing the T-90, in recent days the country has backtracked. Instead, Iran says that it can develop its own main battle tanks that are as capable as the T-90. “We were once interested in buying the Russian tanks. But since we can manufacture similar models within the country and we plan to do so in the near future, the deal is now off,” Iranian army ground forces commander Brig. Gen. Ahmad Reza Pourdastan told the semi-official Fars News Agency.

The two most capable tanks in Iran’s inventory are the T-72S, of which it has 480 examples, and the domestically manufactured Zulfiqar, of which it has 150. The latter is a modified copy of the U.S.-built M60 Patton. There is no evidence to suggest that Iran has the technological wherewithal to build a machine in the same league as the T-90—or for that matter—a vehicle that could hope to engage a M1A2 Abrams or Leopard II on an equal footing.

Iran often boasts about the prowess of its military industrial complex. But more often than not, Tehran’s defense projects turn out to be poorly constructed and ineffective—like the so-called Qaher F-313 'stealth' fighter that was unveiled in 2013. After all, it’s equally likely that Tehran abandoned its efforts to purchase the T-90 due financial reasons rather than any technical breakthrough on its part.