How Russia's Military Is Becoming Even Deadlier 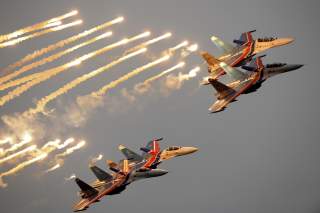 Russia is willing to keep its forces in Syria despite the potential losses incurred because the Kremlin believes that the benefits outweigh the costs. From the Russian perspective, Moscow’s campaign in Syria affords the Kremlin invaluable combat experience that is helping it to refine the capabilities of its military forces.

In the Kremlin’s view, one of the most important reasons for Russia to continue its campaign in Syria is to further refine its newly developed precision-guided strike capability. “Syria is not a shooting range for Russian weapons, but we are still using them there, our new weapons,” Putin said. “This has led to the improvement of modern strike systems, including missile systems. It is one thing to have them, and quite another thing to see how they fare in combat conditions.”

Putin noted that Syria has also proven to be important for Russia’s defense industry—which has gained valuable insights into how the Kremlin’s forces use their hardware in combat. “When we started to use these modern weapons, including missiles, whole teams from our defense industry companies went to Syria, and worked there on-site—it is extremely important for us—to finalize them and figure out what we can count on when using them in combat conditions,” Putin said.

But Syria has proven to be more than just a proving ground for Russia’s military technology. The Syria campaign has helped Russia to further develop its military leaders and provided its officer corps with actual combat experience. That, in turn, has allowed Russian forces to vastly improve their tactics, techniques and procedures.

“Our commanders – we had a large number of officers and generals go in Syria and take part in these hostilities – began to understand what a modern armed conflict is, how important communication, intelligence, interaction between all-arms units and formations is, how important it is to ensure the effective operation of the aerospace group, aviation, ground forces, including special operations forces,” Putin said. “This has enabled us to take another major step in improving our armed forces.”

Michael Kofman, a senior research scientist at the Center for Naval Analyses specializing in Russian military affairs, noted that the Kremlin’s war in Syria has proven to be invaluable to Moscow as a de facto live-fire training range. “Much of the senior military staff has rotated through Syria, and so has a substantial percentage of the air force,” Kofman said. “Most of the district commanders and combined arms army commanders have spent time on staff in Syria. Syria is now the good war, designed to bloody the Russian armed forces and a sustainable training pipeline for senior officers.”

Indeed, much of the funding for the Kremlin’s Syria campaign is drawn from the Russian military’s training budget. “Money for the war is taken from the combat training part of the military budget,” Vasily Kashin, a senior fellow at the Center for Comprehensive European and International Studies at Moscow's Higher School of Economics, said. “All of the new equipment was combat tested there—even the types not yet approved for serial production, tens of thousands of officers got real combat experience. Spending the same amount of money on training would not get the same results.”

Regarding training and lessons learned, the Russians believe that the war is essentially cost neutral. “Of course, it is extremely important and, in a sense, it is paying for itself,” Kashin said.

The most important lesson the Russian military has learned in Syria is the need for airpower to coordinate closely with ground forces. “In Syria, first, the Russian Aerospace Forces learned how to fight, and then increasingly began to learn how to fight in support of ground forces,” Kofman said. “Here special forces units and advisers fought a separate battle, but increasingly they began to integrate air power with ground operations in real time.”

The Russian military also quickly learned the limitations of its sensors and weapons systems. “The Russians quickly figured out that while they had the platforms, their weapons and systems were still inadequate for precision employment,” Kofman said. “The SVP-24 [computerized bomb-sights] added considerable accuracy, but they had to fly too high, and ultimately Russian munitions are far too big for the job. Eventually, the helicopter force came in as one of the few components that has the ability to deliver PGMs [precision-guided munitions] against moving targets.”

While the Syria campaign has exposed weaknesses in Russia’s weapons, sensors, tactics and training, it has also afforded Moscow an opportunity to address those deficiencies. The Russians have made enormous gains in capability since the beginning of their campaign in Syria in 2015. “Over time they refined the recon strike complex, working out the ability to engage targets in near real time,” Kofman said.

The Cost of War

But Russia’s gains in Syria have not come without a price—Moscow has lost both men and material during its intervention in that war-torn nation. Putin acknowledged that Russian forces had lost both troops and equipment during the Kremlin’s intervention in Syria to prop up the Assad regime. “We know that the use of the armed forces in combat conditions means losses,” Putin said. “We will never forget about those losses and will never leave the families of our comrades, who have not returned home from Syria, in trouble.”

Despite the losses, Putin insists that Russian military operations in Syria are needed to secure Moscow’s vital interests in the region. Moreover, while Putin insists that Russia has ceased major combat operations inside Syria, Moscow will not withdraw its forces from the region anytime soon. “Our military is there in order to secure Russia's interests in this vitally important region of the world, which is very close to us, and they will be there as long as it benefits Russia and in pursuance of our international commitments,” Putin said.

Nonetheless, Putin—perhaps cognizant that the Russian population is not onboard with an open-ended commitment in the Middle East—said that Moscow does not intend to remain in Syria permanently. “We are not planning to withdraw those units, but I am drawing your attention to the fact that I did not call these sites bases,” Putin said. “We are not building long-term structures there and can withdraw all of our service members quickly without material loss. So far, they are necessary, they are fulfilling important tasks, including ensuring Russia's security in that region and ensuring our interests in the economic sphere.”

Putin took pains to squarely frame Moscow’s intervention in Syria in terms of direct threats to the Russian homeland. Putin made the case to his people that it is better to fight Islamic extremists from the former Soviet Union’s Central Asian republics in Syria rather than at home in Russia itself.  “Let me remind you that thousands of militants, natives of Central Asian countries, with which we have no controlled borders, are massing on Syrian territory,” Putin said. “It was better to deal with them and destroy them over there than confront them with lethal force here.”

Indeed, the percentage of the Russian public that actively takes an interest in the campaign in Syria generally hovers around a fifth of the population. “When something really happens there, there would be some 30 percent of people who are really looking into it,” Kashin said. ”When nothing major happens, it would be only some 20 percent really taking any interest. But among the people who really care about the campaign—which means they spend time reading and watching—support for the war is overwhelming.”

The reason for that support is that those Russians who are paying attention to the campaign believe that it is better for Moscow to fight extremist elements in Syria rather than inside Russia itself. “The explanation that we are killing people who otherwise would come to the former Soviet territories sounds logical,” Kashin said.

Is Syria Really One of Russia’s Vital Interests?

While the Kremlin might claim that its campaign in Syria is of vital interest to Russia, there is room for considerable skepticism. “On balance, the Russian leadership sees Syria as an important campaign, and of strategic value in terms of interaction with the United States,” Kofman said. “However, it is not a vital interest. If it was, Putin would not be emphasizing how quickly they're positioned to leave. On the contrary, Moscow is keeping a close eye on how much they're leveraged into this conflict, and making sure there is nothing there that cannot be withdrawn on short notice.”