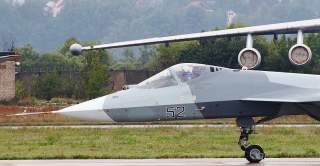 Russia’s United Engine Corporation (UEC) has started ground testing a next-generation engine for the Sukhoi T-50 PAK-FA fifth-generation stealth fighter according to a statement by the company.

The PAK-FA—which is under development—is currently powered by a pair of 33,000-pound thrust class Saturn AL-41F1 afterburning turbofans. However, the AL-41F1—a version of which is also installed on the Sukhoi Su-35S Flanker-E—is not powerful enough to meet the requirements for the PAK-FA. Ultimately, the AL-41F is a highly modified derivative of the original Sukhoi Su-27’s AL-31F powerplant.

While the new engine—often referred to as the izdeliye 30—is being designed by the Lyul'ka design bureau under the leadership of general designer-director Eugene Marchukova, it is being tested at the Lytkarinsky Machine-Building Plant. The engine will likely become operational sometime after 2020. It’s only with the addition of the second stage engine that the PAK-FA will meet the requirements of both the Russian and Indian air forces.

Under ordinary circumstances, an appropriate engine would have been under development for the PAK-FA before work started on the airframe design. However, the Russian defense industry was in a state of chaos in the aftermath of the collapse of the Soviet Union. As such, Moscow was not able to start developing an appropriate engine for the new aircraft ahead of time during the 1990s—which in many ways was a lost decade for the Russian defense industry.

While there are few details available about the izdeliye 30 engines, the powerplant is expected to deliver 24,054lbs dry thrust and 39,566lbs of afterburning thrust. With the new engine installed, the PAK-FA should be able to offer kinematic performance comparable to the Lockheed Martin F-22 Raptor—cruising without afterburner at speeds exceeding Mach 1.5 with a maximum speed greater than Mach 2.0 at altitudes of around 60,000ft. “Performance-wise it certainly looks to compete with the Raptor,” one senior military official with extensive experience on U.S. fifth-generation fighters told me some time ago.