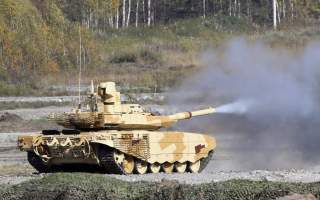 The Eastern Front during World War II brought the enduring image of tanks bogged down in seas of thick, sticky mud.

While it might come as a surprise, the twice-annual Russian mud is still a major military problem. So, Russia has developed a road-laying truck for its engineering troops called the KVD, short for “temporary road system,” to lay down a 50-meter-long aluminum sheet to help tanks and other armored vehicles to cross some of the stickiest paths.

More than 72 years of tank development since the end of World War II have not found a military solution for the mud — just quick fixes like the KVD. For an illustration of just how bad the mud is, here’s a video of a T-90 getting stuck in a morass before being pulled out by another tank.

Back during the war, that tank would have probably been a T-34 and soldiers would’ve probably left it there.

There’s not just mud to contend with, but swamps and bogs which have slowed down invading armies in the past. The mud and swamps did not defeat those armies, and Russian soldiers have struggled just as much in learning how to move and fight in such terrain. The mud does not pick sides.

“The main aim was for tank columns to move into the rear of the German Army,” Suvorov told the paper. “Back then they simply abandoned vehicles that got stuck in mud and carried on with the offensive, but that will not happen with the KVD.”

O.E. Watch, the monthly newsletter of the U.S. Army’s Foreign Military Studies Office, noted that the Russian term rasputitsa translates to “the time of bad roads.” That, of course, would be during the spring when the snow melts and again in August when rains turn the ground into mush.

The KVD’s aluminum road can take up to 60 tons of weight, more than enough to handle main battle tanks including Russia’s new T-14 Armata. The vehicle is a KamAZ-63501 truck which rolls out the “carpet” with an electric motor. The Russian Ministry of Defense has already conducted preliminary tests involving a two-meter-deep swamp and a column of heavy, tracked vehicles.

Besides moving through swamps, the KVD can help in river-crossing operations. The Russian army uses a heavy pontoon bridge, the PP-2005M, also carried on KamAZ trucks. These can get stuck in mud along riverbanks when deploying the bridges.

Thus, the solution is to lay a temporary road, drive onto it, and then drop the pontoons. It’s a seemingly minor piece of hardware but it adds up in giving Russia’s armored forces some flexibility.