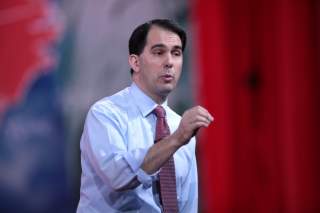 In a few weeks’ time, Chinese president Xi Jinping will arrive at the White House for a state visit. He will be immediately greeted by President Obama, Vice President Biden, and other VIPs. The American president will then escort his Chinese counterpart up a red carpet, where Xi will be feted with a 21-gun salute. American servicemen and women in full dress garb will stand for inspection.

One can only imagine what Xi will be thinking as he is honored in this way. Perhaps a subtle smirk will cross his face, revealing a sense of bemusement as he considers that even stealing the personnel information of 20 million federal employees didn’t deter the American president from playing the flattering host.

But now, it seems, next month’s state visit may become an issue in presidential election politics. Scott Walker, governor of Wisconsin and running for the Republican nomination, has issued a statement calling for the visit’s cancellation. Here’s the kicker:

"Given China’s massive cyberattacks against America, its militarization of the South China Sea, continued state interference with its economy, and persistent persecution of Christians and human rights activists, President Obama needs to cancel the state visit. There’s serious work to be done rather than pomp and circumstance."

Canceling the visit would make for a significant response to China’s recent transgressions, and one that Beijing would take seriously. Importantly, cancellation of the visit would be in accord with American interests and American values. When you catch a burglar in the act, you don’t serve him a hot meal and then send him on his way, loot in tow. And when a dictator comes to town, you don’t toast his health and good fortune. Yet this is precisely the reception Xi Jinping can expect.

State visits, of course, have their place. They can signal to allies and partners that America values their friendship; they signal to adversaries that those friends are not to be trifled with. Over the past seven years, President Obama has hosted eight such visits (Xi will be the ninth), mostly with countries with which we share values and interests:

That’s seven democracies, five long-time treaty allies, and two successors to Mao Zedong. Only one of these countries (hint: it’s not Mexico) is engaged in a long-term effort to challenge America’s global leadership and upend the U.S.-shaped liberal international order upon which peace and prosperity have long depended. Oddly, that country is the only country represented twice on the list.

China, perhaps the greatest long-term foreign policy challenge facing the United States, has largely been absent from the presidential campaigns to date. The Walker statement may change that. The country needs and deserves a real debate on the future of U.S.-China relations and on how best to deal with China going forward.

That is not a debate that the Obama administration has welcomed. Hopefully, the other presidential aspirants will engage in that conversation, one from which a better China policy should emerge.