How Taiwan Would Defend Itself from a Decapitation Strike (By China) 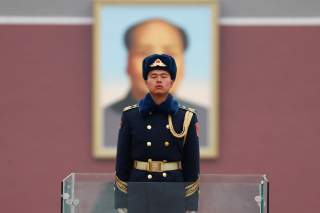 In military terms, a “decapitation” strike refers to the practice of targeting a country’s top leadership in the opening hours of a war — cutting off the head of an enemy army and its political system. Taiwan, situated close to China with its many ways of carrying out such an attack, is vulnerable.

Remote though it may seem, Taiwan takes the possibility seriously enough to treat defending against decapitation to be among its top military priorities under its “resolute defense” doctrine. China also seems to prepare to do it, at least as a way of rattling Taiwan and putting it under pressure. In 2015, Chinese troops drilled in Inner Mongolia at a base built to resemble the Taiwanese Presidential Palace.

That exercise could have been a form of psychological warfare. But Taiwan’s military can never be too sure and it has a contingency plan in place were China to aim right at Taiwan’s political leadership — the defense of which falls to the Republic of China Marine Corps’ 66th Brigade based in New Taipei City, a region surrounding Taipei proper. One of the 66th’s battalions is based within the capital city itself at a military college.

It’s unclear if this is the same battalion revealed in 2017 by Taiwan’s Defense Ministry to specifically guard the Bo’ai Special Zone which includes the colonial-era Presidential Palace and government ministerial offices — as the Taiwanese military is quiet on the details, although it disclosed an anti-decapitation exercise in July 2017. The 66th Brigade has around 3,500 soldiers and is equipped with M-41 Walker Bulldog tanks and M-113 armored personnel carriers.

At the least, the 66th’s battalion at the military college could act as reinforcements for the presidential guards.

“Specifically, the [Special Zone] battalion will guard against any attempts to eliminate or incapacitate the president, be it an air assault by Chinese paratroopers or vehicle break-ins as seen in past incidents, and respond in concert with marines and Taipei police deployed in the vicinity,” Asia Times reported — our emphasis in italics.

At the least, the 66th’s battalion at the military college could act as reinforcements for the presidential guards.

“Specifically, the [Special Zone] battalion will guard against any attempts to eliminate or incapacitate the president, be it an air assault by Chinese paratroopers or vehicle break-ins as seen in past incidents, and respond in concert with marines and Taipei police deployed in the vicinity,” Asia Times reported — our emphasis in italics.

However, a Chinese decapitation strike could very well backfire, according to Martin Edmons and Michael Tsai in their 2003 book Taiwan’s Security and Air Power. “At the first signs of such an attack, leaders typically disperse and this simple remedy works quite well,” the authors wrote. “Moreover, the population is likely to rally behind any leaders threatened by China. The attack itself is likely to provoke nationalist sentiments that will strengthen rather than weaken the leader.”

Speculating about a decapitation strike does make the pages of Chinese newspapers. One recent example comes from Wang Hongguang, a former deputy commander of the PLA’s Nanjing Military Region who has a reputation for nationalistic hyperbole such as claiming — implausibly doesn’t begin to cover it — that China could invade and conquer Taiwan within three days.

Despite his status, Wang doesn’t speak for the Chinese military and the PLA’s official publication once cautioned readers not to “over-interpret” the retired general’s remarks.

O.E. Watch, a publication of the U.S. Army’s Foreign Military Studies Office, noted that this “could very well be the ramblings of a disgruntled military officer. Or, being that it was published in official Chinese media, it could even be an attempt to instill fear and uncertainty in the Taiwanese population in hopes that the people might pressure the government to reverse its rhetoric and stop pushing for independence.”

In other words, psychological warfare — like the purported military exercise targeting a stand-in for Taiwan’s presidential palace.