How the A-10 Warthog Could Crush Iran's Lethal 'Swarm' Navy 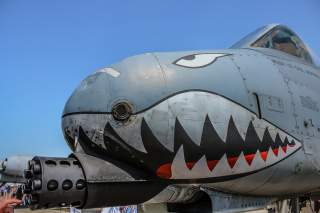 On Feb. 6, the low- and slow-flying Warthogs together with Canadian CF-18 Hornets carried out simulated attacks on dozens of boats in Florida’s Choctawatchee Bay. The planes didn’t drop any ordnance, however, as the boats were being piloted by local captains hired by the Air Force.