How the Navy Plans to Sink Russian, North Korean or Chinese Ships in a War 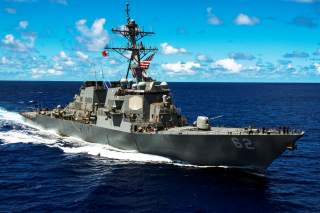 The Pentagon and the Navy are accelerating a new maritime-specific Tomahawk missile designed to advance the weapon's ability to address fast-emerging near-peer threats and destroy enemy ships moving at sea.

Unlike a typical Tomahawk missile which, over the years, has been used to successfully target and destroy "fixed" targets such as enemy bunkers, static troop locations, command-and-control as well as key infrastructure - the new Maritime Strike Tomahawk is specifically engineered with a next-generation ability to track and destroy moving targets at sea, Navy and Raytheon developers say.

Navy program managers have told Scout Warrior that the weapon incorporates an all-weather  seeker, coupled with mid-course in-flight target updates, will provide the missile the ability to strike a moving maritime target.

Johnson added that the program is a new start acquisition effort which plans to field the new Tomahawk by the mid 2020s.

"The weapon is designed to engage high-value moving targets such as enemy ships. Different countries are releasing more and more capable ships. We want to enable the US Navy to have freedom of the seas and have sea control," Chris Sprinkle, Maritime Strike Tomahawk Manager, Raytheon, told Scout Warrior in an interview.

While weapons developers explain that many of the particular details of the new seeker technology are not available for discussion for security reasons, officials do say it is designed to integrate with and function alongside existing Tomahawk targeting and navigation technologies such as infrared guidance, radio frequency targeting and GPS systems.

"The multi-mode seeker rides on a very capable multi-function processor.  When people talk about radar and IR systems put onto a weapon platform, they recognize that the antennas you see on the front end are useless if there is not a capable processor is on the back side," Sprinkle said.

Constructing an "upgradeable" technology such that processing hardware can quickly be integrated with new software as threats emerge is an integral component of the new seeker technology.

"This allows us to operate whatever set of sensors are needed to meet operational requirements. If the threat has evolved, we won't have to bring the missile back and put on a new set of sensors," Sprinkle added.

Multiple systems can now be accessed from a single workstation and other systems were condensed, freeing up space in control rooms, a Navy statement said.

The Navy is currently wrapping up the procurement cycle for the Block IV Tactical Tomahawk missile.  In 2019, the service will conduct a recertification and modernization program for the missiles reaching the end of their initial 15-year service period, which will upgrade or replace those internal components required to return them to the fleet for the second 15 years of their 30-year planned service life.

In addition, more than 200 Tomahawks were fired in NATO action in Libya in 2012Tomahawk missiles weigh 3,500 pounds with a booster and can travel at subsonic speeds up to 550 miles per hour at ranges greater than 900 nautical miles. They are just over 18-feet long and have an 8-foot, 9-inch wingspan.