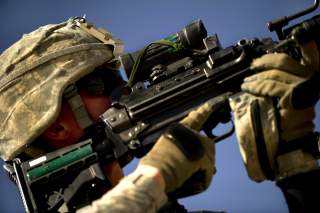 - The Small Arms Weapon and Fire Control device, which utilizes a specialized laser that Army Times described as “a combination of a laser range finder, long-wave infrared camera and video camera all running off six AA batteries” to stay locked on specific targets downrange, automatically adjusting a rifle to compensate for recoil and other external forces.

- The Rifle Integrated Optics, which functions like a heads-up display embedded inside a conventional rifle scope. It “enhances the view, increases hit probability, reduces time to engage and increases target recognition,” per Army Times.

- The Advanced Small Arms Ballistic System, which miniaturizes the positioning system and range finder typically used on Army artillery pieces, so they can be used on the standard infantry rifle. It includes a digital database for ammo calibers that, based on Ward’s description, sounds ripped right from a military sci-fi flick.

- The Precision Optical Wind System, developed in conjunction with Sandia National Laboratories, which uses a multi-laser rangefinder system to estimate wind speed and compensate rifle positioning accordingly. No more licking your finger like some sort of goon to get a feel for the breeze.