How the U.S. Military Is Using Augmented Reality to Bolster Troop Readiness 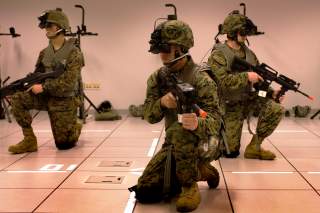 Imagine the first time you’re dropped in a hot zone is the first time your boots have really hit the ground. Your pulse is racing, there’s gunfire coming from in every direction, and you have seconds decide what to do and where to go. Sure, you’ve done some time in pre-deployment training, but most of your time was spent in the barracks, conceptualizing war using two-dimensional models. Nothing has really prepared you for this — but the Army is going to change that.

That’s the impetus behind the Synthetic Training Environment (STE), an immersive augmented reality system designed to place soldiers in diverse operational environments, stress them physically and mentally and bolster readiness through a grueling series of virtual scenarios. The Army Research Laboratory, University of Southern California Institute for Creative Technologies, Combined Arms Center-Training and Program Executive Office for Simulation, Training, and Instrumentation are currently working on refining the project’s conceptual principles.

“Due to the rapidly expanding industrial base in virtual and augmented reality, and government advances in training technologies, the Army is moving out to seize an opportunity to augment readiness,” Col. Harold Buhl, Army Research Lab Orlando and Information and Communications Technology program manager, said in an Army release Aug. 8. “With STE, the intent is to leverage commercial advances with military specific technologies to provide commanders adaptive unit-specific training options to achieve readiness more rapidly and sustain readiness longer.”

Though researchers have yet to develop any sort of prototype just yet, Army officials hope that STE will eventually be used to train armor, infantry, Stryker, and combat aviation brigade combat teams.

“As the Army evolves with manned and unmanned teams and other revolutionary battlefield capabilities, STE will be flexible enough to train, rehearse missions and experiment with new organization and doctrine,” Buhl said.

But there are more benefits to using augmented or virtual reality than variable practice. They save money, are much less dangerous to trainees, and allow for the development of  specific cognitive skills. What’s more, real field equipment is fragile and harder to replace than simulators.

The Army is just the latest branch looking to technology to fill the readiness gap. The Marine Corps is in the process of fielding its Marine Tactical Decision Kit, a wearable VR battlefield simulation developed by  the Office of Naval Research that allows warfighters to practice and compete in tactical decision-making on a routine basis. And augmented reality is already finding its way downrange. In May, the Navy tested its GunnAR helmet — a headset designed to enable sailors manning naval gun systems and liaison officers to “experience heightened, integrated visual and audio coordination in order to identify, track and fire upon targets,” according to a Navy release.

The real question is whether or not virtual and augmented reality simulations, despite their increasing complexity and detail, will ever totally stack up against field training. And the answer may be yes — if you look at the research about video games. A growing body of ONR research suggests that that simulations can better prepare soldiers’ and Marines’ cognitive abilities, making them faster and more efficient without sacrificing the quality of their work.

“Video game players are far superior to non-video game players in the ability to process things like field of vision, being able to hold digital objects in your memory,” Ray Perez, program manager at the ONR’s Cognitive Science of Learning Program, told Task & Purpose in 2016. “They can process information faster.”

Who knows, maybe someday all our warfighting will be augmented, and virtual reality will become our actual reality. We don’t about you, but we’re convinced The Matrix is coming — and we’re not sure we like it.