How the U.S. Navy Could Transform Nuclear Submarines Into 'Underwater Aircraft Carriers' 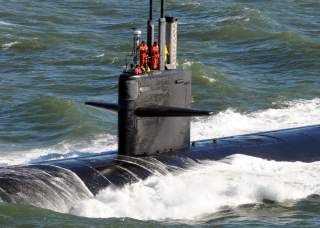 As further evidence of the Navy's progress toward computer-driven drones, the Navy and General Dynamics Electric Boat are testing a prototype of a system that would allow the launch and recovery of unmanned underwater vehicles and other payloads from the missile tube of a cruise missile submarine.

Groups of integrated drones would then instantly relay pertinent data to underwater or ship-board computing systems and sensors. As a result, humans in a command and control function to access relevant information faster and more efficiently, providing commanders with a larger window with which to make critical decisions, Rear Adm. Robert Girrier, Director, Unmanned Warfare Systems, told Scout Warrior in an interview.

Correspondingly, a group of ship-launched aerial platforms such as Puma unmanned systems accompanied by swarms of mini-drones are might be able to beam back real-time video feeds of threats beyond-the-horizon, finding and possibly attacking otherwise out-of-range enemy targets such as fast-approaching small boats, ships or incoming anti-ship cruise missiles.

(This first appeared in Scout Warrior here back in mid-2016.)

It is not inconceivable more timely identification of approaching threats and attacks at farther distances could mean the difference between life or death for crew members on board a ship or submarine.

“We aim to harness these technologies. In the next five years or so we are going to try to move from human operated systems to human assisted systems that are less dependent on people. Technology is going to enable increased autonomy," Girrier told Scout Warrior.

The strategy is aimed at enabling submarines, surface ships and some land-based operations to take advantage of fast-emerging computer technologies. While not likely to be realized in immediate or near-term future, this trajectory will ultimately likely lead to the use of what’s called “artificial intelligence.” This involves the use of more independent, computer-driven unmanned systems to gather, organize and integrate a vast array of different information and sensor data – before providing it to human commanders.

Girrier explained that the emerging strategy is by no means intended to replace humans but rather leverage human perception and cognitive ability to operate multiple drones while functioning in a command and control capacity.

Perhaps multiple small drones could send out an acoustic ping and then analyze the return signal to pinpoint the location of a threatening enemy target – providing a submarine with the necessary data to launch a precision-guided heavyweight torpedo to destroy the threat from a safer distance.

“This is not talking about removing the human in the loop but optimizing humans and machines working together. Think about combining the creativity and agility of the human mind with a computer that does things faster - that is pretty powerful. That is at the center of our unmanned strategy,” Girrier added.

Unmanned systems will also increasingly be involved in strike missions to identify and attack enemy targets from the air, land or undersea domain, Girrier added. However, in a manner consistent with the development of other unmanned systems, decisions about the use of lethal force with drones will, according to Pentagon doctrine, be made by human beings in a command and control capacity.

The Navy’s Unmanned Systems Directorate, or N99, was formally stood up this past September with the focused mission of quickly accessing emerging technologies and applying them to unmanned platforms.

Girrier explained how the process of increasing computing power is already underway with a handful of current Navy platforms, including the Navy’s RQ-4 Alpha Global Hawk or Broad Area Maritime surveillance which has been operating in the Middle East region for quite some time now. The Navy Global Hawk is now being developed into a high-tech maritime-specific platform called the Triton; the Triton is engineered with particular maritime sensors, an ability to traverse through different altitudes and weather conditions and a special ability to operate in icy conditions.

The Navy has added a new software programmable radio technology to the RQ-4 system, giving it a much more efficient ability to transmit information. Software programmable radios can often operate on multiple frequencies with different waveforms to send IP packets of data, voice and even video across the force in real time. Each radio not only sends RF signals but also functions like a node or router in a wireless computer network. These radios allow the Navy to combine multiple radios into a single box, Girrier explained.

“Software reprogrammable radio is an ability to increase the configuration of a specific radio so that you do not have to change it out. Instead of having four different radios in different spectrum ranges, you have one box,” he said. “Technology is allowing us to reconfigure things within the same size, weight and space.”

In addition, the Navy is operating a small ship-launched Puma drone to provide over-the-horizon visual range for surface platforms, he added.

“This is helpful in counter-piracy and interdiction ops and has an enhanced recovery. It uses a GPS position to fly the UAS into a net and make it more precise, quicker and more efficient,” Girrier said.

The Navy is also working with platforms called Wavegliders designed to collect oceanographic and hydrographic information, Girrier explained.  For instance, a current underwater drone called the Seaglider uses buoyancy and wings to achieve forward motion as opposed to an electrically driven propeller. It is able to gather oceanographic data for long periods of time, collecting data and then sending it back.

The service is the early phases of developing an emerging program called the MQ-25 Stingray intended to be a carrier-launched unmanned refueling and ISR platform.

As further evidence of the Navy's progress toward computer-driven drones, the Navy and General Dynamics Electric Boat are testing a prototype of a system that would allow the launch and recovery of unmanned underwater vehicles and other payloads from the missile tube of a cruise missile submarine.

The system is showing promise in early testing and was slated to go sea aboard a guided missile, nuclear powered submarine (SSGN), Electric Boat officials said.

The vehicle is designed for a range of potential underwater missions to include counter-mine patrol, sonar or other intelligence, surveillance and reconnaissance (ISR) missions.

Electric Boat and Navy officials explained how submarines have the ability to get really close to something.

The prototype vehicle is hooked up to temporary hydraulics and engineered to acquire a buoy at the top of the missile tube using a transponder, officials explained.

Marlin comes out of a tube, rotates, and then deploys. It goes off and does its thing — mine warfare, ISR, etc. –Then it comes back and it mates with that buoy before it is brought back down into the tube, Electric Boat developers said.

Once a tactical version of the technology is built, it will fill up the launch tube out to 60-inches in diameter and stretch as long as 23-feet. The vehicle could weigh up to 30,000-pounds.

The prototype vehicle is controlled by two laptop computers, removing the need to adjust the infrastructure of the submarine in order to accommodate the system, Electric Boat officials explained.

“It is a gigantic elevator that will take up to 30,000 pounds and raise it from inside the ship to outside the ship. We’re not modifying the submarine’s infrastructure to control this,” an Electric Boat developer described.